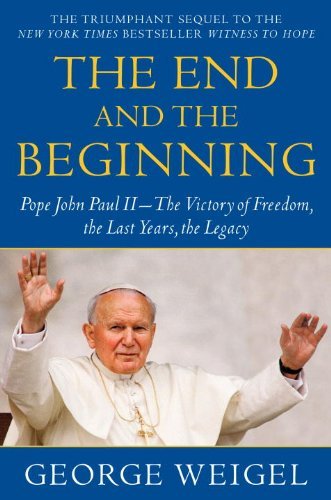 The End and the Beginning: Pope John Paul II : The Struggle for Freedom, the Last Years, the Legacy

""George Weigel completes the definitive biography of Pope John Paul II with this indispensable second volume. It is essential reading for anyone who wants to understand the man and the Church he led for a quarter century."---John L. Allen Jr., Author of the Future Church" ""This book is the Rosetta stone of John Paul II's life and legacy. Only George Weigel's masterful combination of rare opportunities with rarer intuitive and analytic skills could do justice to John Paul II's epic life, which changed the world. More than a sequel to Witness to Hope, this is the climax---an interpretive key like no other."---Carl A. Anderson, Supreme Knight and Chief Executive officer of the Knights of Columbus" ""Weigel has written what can only be described as an unforgettable book---a portrait of Karol Wojtyla, his Church, and his times that vividly captures one of the central characters of the last one hundred years. Compellingly written, rich in drama, and exhaustive in its research, this is the definitive work on the life and legacy of the Polish Pope and a crowning sequel to Weigel's Witness to Hope."---Most Reverend Charles J. Chaput, O.F.M. Cap., Archbishop of Denver" ""As a young man, Karol Wojtyla studied drama, but the greatest human drama of the second half of the twentieth century is the story of his life, his calling, his pontificate. George Weigel draws upon his immense personal knowledge and his finely tuned sense of history to describe the last act of John Paul's life and offers a balanced and appreciative review of the play. This is a book for everyone who wants to be informed about the life of the Catholic Church in recent times, but those who knew and loved the late Pope are especially in Weigel's debt."---Francis Cardinal George, O.M.I., Archbishop of Chicago" ""In this sequel to Witness to Hope, George Weigel has put the final touches on his definitive portrait of John Paul the Great. With the aid of newly available material, he has filled out his account of Wojtyla's role in the demise of European communism with the story of the relentless campaign that Soviet-era operatives were waging against their feared Polish antagonist in those years. With his insights into Vatican diplomacy, his portrayal of the aging pontiff's struggles with challenges to the Church in the postmodern world, and his judicious assessment of his subject's spiritual and intellectual legacy, Weigel has given us yet another masterpiece of biography."---Mary Ann Glendon, Professor of Law at Harvard University and Former U.S. Ambassador to the Holy see" ""The author of the landmark Witness to Hope has now finished the story he began so brilliantly. In his new book, George Weigel---biographer and theologian---details John Paul II's battle against totali-tarianism and chronicles the Holy Father's humble acceptance of suffering at the end of earthly life. As ever, Weigel writes with confidence, clarity, and insight."---Jon Meacham, New York Times Bestselling Author of American Lion: Andrew Jackson in the White House" ""As March gave way to April in the spring of 2005 and the world kept vigil outside the apostolic palace in Rome, the pontificate of Pope John Paul II, then drawing to a poignant end, was already being described as one of the most consequential in two millennia of Christian history."" "With these words, world-renowned author and NBC Vatican analyst George Weigel begins his long-awaited sequel to the international bestseller Witness to Hope: The Biography of Pope John Paul II. More than ten years in the making, The End and the Beginning: Pope John Paul II---The Victory of Freedom, the Last Years, the Legacy tells the dramatic story of the Pope's battle with communism in light of recently disclosed and previously classified documents and brings to a conclusion Weigel's landmark portrait of a man who left an indelible mark on the Catholic Church and changed the course of world history." "When he was elected pope in the fall of 1978, few people had ever heard of the charismatic Karol Wojtyla. But in a very short time he would ignite a revolution of conscience in his native Poland that would ultimately lead to the collapse of European communism and the death of the Soviet Union. What even fewer people knew was that the KGB, the Polish secret police, and the East German Stasi had been waging a dangerous, decades-long war against Wojtyla and the Vatican itself. Weigel, using once-top-secret Soviet-era files, chronicles John Paul's struggle against the dark forces of communism." "Weigel then recounts the tumultuous last years of John Paul's life as he dealt with a crippling illness, the new world disorder, and revelations about corruption within the Catholic Church. This thought-provoking and authoritative biography of John Paul II concludes with a probing and comprehensive assessment of a man who lived his life as a witness to hope in service to the Christian ideals he embraced."--BOOK JACKET.… (more)