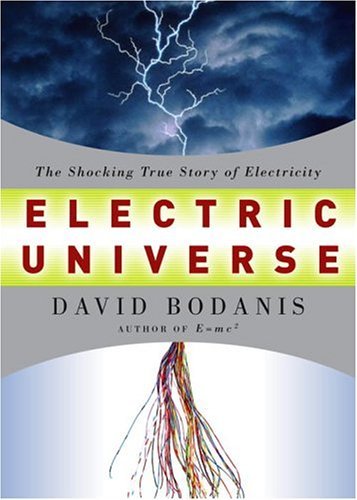 In his bestselling E=mc2, David Bodanis led us, with astonishing ease, through the world's most famous equation. Now, in Electric Universe, he illuminates the wondrous yet invisible force that permeates our universe and introduces us to the virtuoso scientists who plumbed its secrets. For centuries, electricity was seen as little more than a curious property of certain substances that sparked when rubbed. Then, in the 1790s, Alessandro Volta began the scientific investigation that ignited an explosion of knowledge and invention. The force that once seemed inconsequential was revealed to be responsible for everything from the structure of the atom to the functioning of our brains. In harnessing its power, we have created a world of wonders complete with roller coasters and radar, computer networks and psycho pharmaceuticals. A superb storyteller, Bodanis weaves tales of romance, divine inspiration, and fraud through lucid accounts of scientific breakthroughs. The great discoverers come to life in all their brilliance and idiosyncrasy, including the visionary Michael Faraday, who struggled against the prejudices of the British class system, and Samuel Morse, a painter who, before inventing the telegraph, ran for mayor of New York City on a platform of persecuting Catholics. Here too is Alan Turing, whose dream of a marvelous thinking machine what we know as the computer was met with indifference, and who ended his life in despair after British authorities forced him to undergo experimental treatments to cure his homosexuality. From the frigid waters of the Atlantic to the streets of Hamburg during a World War II firestorm to the interior of the human body, Electric Universe is a mesmerizing journey of discovery by a master science writer.A popular history of the science of electricity follows the work of the scientists and pioneers who investigated its unique properties and secrets, including Alessandro Volta, Michael Faraday, and Samuel Morse, and discusses the influence of their scientific breakthroughs on our ability to harness its power. By the author of E=mc2. 75,000 first printing.… (more)

LibraryThing member themulhern
Seemed pretty lightweight, like it was written for the YA market and not really for adults. Heavy on casually inaccurate narrative, light on the actual technology, with pretty poor metaphors. I listened to it on audio; I intend to give it a try in physical form to see if it seems more substantive that way.
7 more
LibraryThing member FredB
This is series of descriptions of somewhat unrelated items related to electricity. It talks about such pioneers in the science of electricity as Joseph Henry, Michale Faraday, Thomas Edison, J. J. Thomson, etc. I found the part about the first transatlantic cable the most engaging. It's amazing how little they know about electricity before they went and put in a cable all the way across the ocean. I got a little bit tired of the language the author uses to describe electricity, current, voltage, power, etc. Being a physics professor, I found it too simplistic and "poetic".… (more)
LibraryThing member nmele
I have mixed feelings about this book--the breezy tone struck me as condescending rather than friendly, and most of the stories Bodanis tells are familiar--Michael Faraday's struggles with class prejudice, the work of Edison, Galvani and Volta, etc. But Bodanis did teach me a few things and as I got used to his style I found it less distracting.

This is not, however, anything like a complete history of the discovery of electricity and its applications--Tesla, for example, is nowhere mentioned. And the story pretty much ends with the development of the transistor and the discovery that electric charges pass signals through our nervous systems.

I'm not sure I'd recommend this to anyone over 40...
… (more)
LibraryThing member Clif
This is a very readable history about the development of electricity, a modern convenience that most of us take for granted. I think the book will be appreciated by any reader who wants to know and understand the history behind the development of the modern utilities that we have become so dependent on.

﻿﻿I listened the audio version of this book with much pleasure. The author manages to make science understandable--how novel!--and absorbing. I was particularly taken by the story of Alan Turing, inventor of the (idea, anyway) modern computer.

8 out of 10 Highly recommended to all who want to investigate science painlessly!… (more)
LibraryThing member datrappert
Entertaining and occasionally enlightgening, particularly the rather touching part about Alexander Graham Bell's courtship of his deaf wife. I think I would have enjoyed it more, however, if Bodanis had spent a little more time on what we normally consider as electricity. Instead, he jams it all in, including the birth of computers, the wartime morals of the bombing of Hamburg, and how our brain and body work on electricity as well. As a result, nothing is quite as in-depth as I would have liked.… (more)
LibraryThing member Bulwor
Excellent information. Well written and nicely explained. My heart breaks every time I hear the story of Alan Turing.
LibraryThing member JohannaIvarsson
This book was a great reading during the summer. I study for a degree in electrical engineering and it was really an eye-opening experience to read the history of electricity. How much it has effected our way of life and how hard it can be to be recognised as an inventor.

It is very simply written and David Bodanis even managed to bring in tiny bits of humor into an area of science that, at least in Sweden, is not very appealing to many young people these days.… (more)
Fewer

E=mc2 : a biography of the world's most famous equation by David Bodanis
Genius : the life and science of Richard Feynman by James Gleick
The illustrated longitude by Dava Sobel
Atlantic : great sea battles, heroic discoveries, titanic storms, and a vast ocean of a million stories by Simon Winchester
The Difference Engine: Charles Babbage and the Quest to Build the First Computer by Doron Swade