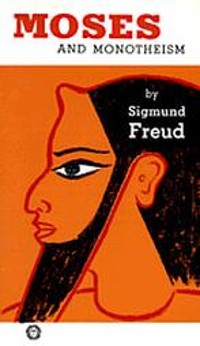 This volume contains Freud's speculations on various aspects of religion, on the basis of which he explains certain characteristics of Jewish people in their relations with Christians.  From an intensive study of the Moses legend, Freud comes to the startling conclusion that Moses himself was an Egyptian who brought from his native country the religion he gave to the Jews. He accepts the hypothesis that Moses was murdered in the wilderness, but that his memory was cherished by the people and that his religious doctrine ultimately triumphed. Freud develops his general theory of monotheism, which enabled him to throw light on the development of Judaism and Christianity.

Not to many people have knowledge of this subject on Freud's writings.

It is amazing to notice the author's courage exposing thesis where he attempt to prove or at least to demonstrate that Moses was an Egyptian and not a Jew.
The argument of the existence of two
Show More
Moses the one from Egypt and the other from Midia, a Medianite, is also surprising although in any way fanciful.

In some bookstores this book is incorrectly classified in the psych area. This is truly a Bible history research, of course using an approach that places, in his words, religion phenomena as a model of neurotic symptoms of the individual.

As I mentioned in other book comment, this kind of study always carries some dose of speculation. Freud was not an exception but without lost of plausibility.
Show Less
1 more
LibraryThing member amydross
Even admirers of Freud tend to be pretty dismissive of the argument here, but I don't think it's so far-fetched... Until he gets to the stuff about genetic memories, which is pretty untenable. But say what you will about Freud, he's never dull.
Fewer