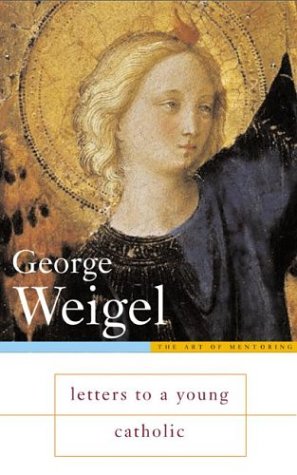 Letters to a Young Catholic

Publisher's description: In this remarkable tour of the Catholic world, George Weigel helps us understand how Catholicism fosters what Flannery O'Connor called "the habit of being." Taking the reader by the hand, Weigel embarks on a journey to Catholic landmarks as diverse as Chartres Cathedral and St. Mary's Church in Greenville, South Carolina; the Holy Sepulcher in Jerusalem and G.K. Chesterton's favorite pub; the grave of a modern martyr in Warsaw, and the Sistine Chapel. Weaving together insights from history, literature, theology, and music, Weigel uses these touchstones to illuminate the beliefs that have shaped Catholicism for two thousand years. With clarity and conviction, Weigel examines the foundations of Catholic faith and explores the topics of grace, prayer, vocation, sin and forgiveness, suffering, and-most importantly-love. Putting a dramatic face on this invitation to Catholicism, Weigel introduces some of the figures who have shaped his faith and thought-Michelangelo and Fra Angelico; Evelyn Waugh and Cardinal John Henry Newman; Father Jerzy Popieuszko and Pope John Paul II; Edith Stein and Mother Teresa-as he also shares anecdotes from his own Catholic life. To a world that sometimes seems closed and claustrophobic, he suggests, Christian humanism offers a world with windows and doors-and a skylight. In these letters, George Weigel conveys the power of a faith that is at once personal and universal, timely and eternal. His book will inspire not only the young generation of Catholics whose World Youth Day celebrations have launched an era of renewal for the Church, but also the faithful, the doubtful, and the searchers of every age.… (more)

LibraryThing member katzenmicd
I finished my Easter reading, Letters to a Young Catholic, today and was struck by the travel journal aspect of the book. It’s arranged around various sites from around the world. The most compelling chapters, for me, visited the scavi under St. Peter’s, the Holy Sepulcher in Jerusalem, Chartes Cathedral in Chartes, and the Churchyard at St. Stanislaw Kostka in Warsaw. I hope to someday see the scavi and Chartres for myself; I’ve been to Holy Sepulcher. And the churchyard in Warsaw, though I’ll likely never visit, causes me to reflect on vocation—the one thing, according to Weigel, that we can do ourselves that no one else can do.

Being letters, these chapters try to convey wisdom, and the final page neatly summed it all up:

"[W]hy deciding on your ‘vocation’…is so important a part of becoming an adult Catholic; why stuff counts; why the real world is the world of transcendent truth and love; why ‘putting on’ the sacramental imagination is part of becoming the fully human being you want to be" (240).

I had noted the notions of “grittiness,” stuff counting, and sacramental vs. gnostic imagination as the three things that stuck out to me. Grittiness says what it conveys—Catholicism trains us to get our hands dirty in the vineyard of the Lord. Stuff counts, which is to say that the earth and the way we treat it counts; other life counts; and most of all other humans count. We must take care of all of them.

Most compellingly though, I thought the notion of sacrament vs. gnosis was interesting. According to Weigel, sacramental imagination is “the core Catholic conviction that God saves and sanctifies the world through the materials of the world” (86). Conversely, the gnostic imagination suggests “stuff doesn’t count; the material world is a distraction…; what counts is the gnosis, the arcane knowledge, that lifts the elect, the elite, out of the grubbiness of the quotidian.” Consequently, “Gnosticism can’t handle the Incarnation” (87). The sacramental imagination sees human history as the story of salvation.

"Thus the romance of orthodoxy—getting the story of salvation history straight as His-story—is the romance of the world. And the adventure of orthodoxy is the greatest of human adventures. It’s not an add-on, a kind of spiritual frequent flyer upgrade. It’s the real deal, the thing itself. That’s what the sacramental imagination teaches us" (99).… (more)
2 more
LibraryThing member oldman
A different way to describe the Catholic Faith is taken by this book. Going to different places and churches to illustrate the various tenets of the Faith to a young Catholic, apparently raising questions about what the faith is that he belongs to. A very informative and inspiring book. Too bad I'm not as young as the audience the author is speaking to. A worthwhile read 5 stars… (more)
LibraryThing member LudieGrace
This book is a spiritual travelogue meant to give young Catholic Christians and other "curious souls" a taste of what it means to practice the Roman Catholic faith in the twenty-first century. Weigel discusses the sacramental imagination, the "grittiness" of the faith, Mary and discipleship, and the importance of beauty. He addresses more contentious topics without becoming polemical or allowing the book to be consumed by them; all the same, it's clear that he's a traditionalist. The combination of his irenic spirit and his ardent love for the Church is refreshing. I definitely gained a deeper appreciation for Catholicism that I might not have gotten from simply sitting down with a theological text, much as I love the latter.
… (more)
Fewer