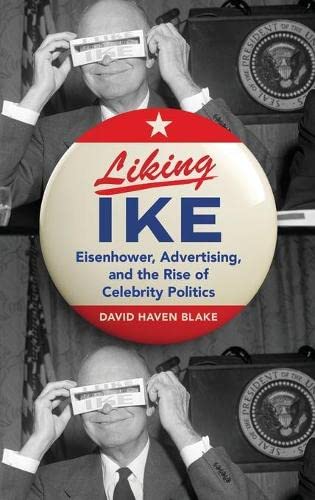 Liking Ike: Eisenhower, Advertising, and the Rise of Celebrity Politics

Describes the role of advertising agencies during the Eisenhower presidential campaigns in enlisting the appearance of celebrities to boost the appeal of the candidate, the beginning of a political strategy that continues to the present day. "Liking Ike reveals the prominent role that celebrities and advertising agencies played in Dwight Eisenhower's presidency. Guided by Madison Avenue executives and television pioneers, Eisenhower cultivated famous supporters as a way of building the broad-based support that had eluded Republicans for twenty years. While we often think of John F. Kennedy and his Rat Pack entourage as the beginning of presidential glamour in the United States, celebrities from Ethel Merman and Irving Berlin to Jimmy Stewart and Helen Hayes regularly appeared in Eisenhower's campaigns. Ike's political career was so saturated with stardom that opponents from the right and left accused him of being a glamour candidate. Author David Haven Blake tells the story of how Madison Avenue executives strategically brought celebrities into the political process. Based on original interviews and long neglected archival materials, Liking Ike explores the changing dynamics of celebrity politics as Americans adjusted to the television age. By the 1920s, entertainers were routinely drawing publicity to their favorite candidates, but with the rise of television and mass advertising, political advisers began to professionalize the way that celebrities brought attention to presidential campaigns. In meetings, memos, and television scripts, they charted a strategy for leavening political programming with celebrity interviews, musical performances, and elaborate television spectaculars. Commentators worried about the seemingly superficial values that television had introduced to political campaigns, and writers, filmmakers, and fellow politicians criticized the influence of glamour and publicity. But despite these complaints, Eisenhower's legacy would live on in the subsequent careers of John F. Kennedy and Ronald Reagan-and, ultimately, provide a template for the presidential campaigns of Barack Obama, John McCain, Donald Trump, and Hillary Clinton."--Jacket.… (more)