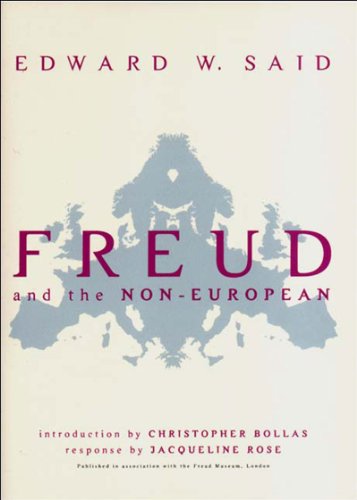 Freud and the Non-European

Using an impressive array of material from literature, archaeology and social theory, Edward Said explores the profound implications of Freud's Moses and Monotheism for Middle-East politics today. The resulting book reveals Said's abiding interest in Freud's work and its important influence on his own. He proposes that Freud's assumption that Moses was an Egyptian undermines any simple ascription of a pure identity, and further that identity itself cannot be thought or worked through without the recognition of the limits inherent in it. Said suggests that such an unresolved, nuanced sense of identity might, if embodied in political reality, have formed, or might still form, the basis for a new understanding between Jews and Palestinians. Instead, Israel's relentless march towards an exclusively Jewish state denies any sense of a more complex, inclusive past.… (more)

LibraryThing member amydross
a wonderfully subtle argument, then everything is blown in the last paragraph when Said suggests a reductive "solution" to the israeli palestinian problem which betrays everything he has argued up to that point.
2 more
LibraryThing member idiotgirl
I read this some time ago. Lectures, as I recall. Who could resist the juxtaposition. . . . I've ready quite a bit of Said, starting with Orientalism of course.
LibraryThing member benjaminsiegel
All the stuff I think about wrapped into one frequently brilliant lecture.
Fewer