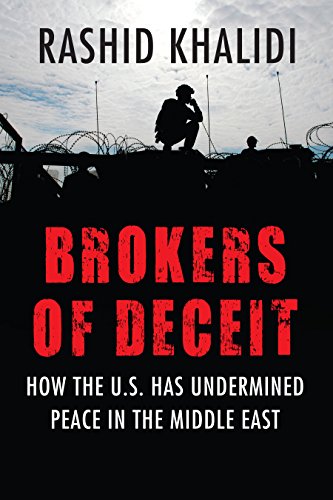 Brokers of Deceit: How the US Has Undermined Peace in the Middle East

Winner of the 2014 Lionel Trilling Book Award An examination of the failure of the United States as a broker in the Palestinian-Israeli peace process, through three key historical moments   For more than seven decades the conflict between Israel and the Palestinian people has raged on with no end in sight, and for much of that time, the United States has been involved as a mediator in the conflict. In this book, acclaimed historian Rashid Khalidi zeroes in on the United States's role as the purported impartial broker in this failed peace process. Khalidi closely analyzes three historical moments that illuminate how the United States' involvement has, in fact, thwarted progress toward peace between Israel and Palestine. The first moment he investigates is the "Reagan Plan" of 1982, when Israeli prime minister Menachem Begin refused to accept the Reagan administration's proposal to reframe the Camp David Accords more impartially. The second moment covers the period after the Madrid Peace Conference, from 1991 to 1993, during which negotiations between Israel and Palestine were brokered by the United States until the signing of the secretly negotiated Oslo accords. Finally, Khalidi takes on President Barack Obama's retreat from plans to insist on halting the settlements in the West Bank. Through in-depth research into and keen analysis of these three moments, as well as his own firsthand experience as an advisor to the Palestinian delegation at the 1991 pre-Oslo negotiations in Washington, DC, Khalidi reveals how the United States and Israel have actively colluded to prevent a Palestinian state and resolve the situation in Israel's favor. Brokers of Deceit bares the truth about why peace in the Middle East has been impossible to achieve: for decades, US policymakers have masqueraded as unbiased agents working to bring the two sides together, when, in fact, they have been the agents of continuing injustice, effectively preventing the difficult but essential steps needed to achieve peace in the region.… (more)

LibraryThing member Jotto
A summary of the role the United States has played in Israeli/Palestinian peace negotiations. Using various historical documentation, the author demonstrates why, given the demands of domestic political expediency, those US negotiators who may have wished to make headway in resolving the Israeli/Palestinian conflict were fated to fail.… (more)

The Israel lobby and U.S. foreign policy by John J. Mearsheimer
An End to Evil: How to Win the War on Terror by David Frum
Dreams and shadows : the future of the Middle East by Robin B. Wright
From Deep State to Islamic State: The Arab Counter-Revolution and its Jihadi Legacy (Ceri Series in Comparative Politics and International Studies) by Jean-Pierre Filiu