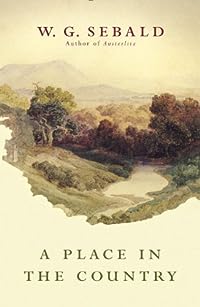 A Place in the Country

When W. G. Sebald travelled to Manchester in 1966, he packed in his bags certain literary favourites which would remain central to him throughout the rest of his life and during the years when he was settled in England. In A Place in the Country, he reflects on six of the figures who shaped him as a person and as a writer, including Jean-Jacques Rousseau, Robert Walser and Jan Peter Tripp. Fusing biography and essay, and finding, as ever, inspiration in place - as when he journeys to the Ile St. Pierre, the tiny, lonely Swiss island where Jean-Jacques Rousseau found solace and inspiration - Sebald lovingly brings his subjects to life in his distinctive, inimitable voice. A Place in the Countryis a window into the mind of this much loved and much-missed writer.… (more)

LibraryThing member edwinbcn
A Place in the country is a collection of essays that breathe the atmosphere of nostalia and Heimatsverlangen, a longing for one's nation. For a long time, this type of sentiment was all but taboo for German authors. Sebald describes how, as a young man he travelled to England to work there for
Show More
three years, packing his most dearest authors. What binds all these authors together is their connection to the ancestral homeland, which is also Sebald's. However, this homeland connection seems more spiritual than actual, as sebald was born in Bavaria, while the authors brought together in his selection originate from the area of Southwestern Germany and Switzerland. It is less a home land, and more like a home region, the Allgäu, which includes the southernmost parts of Baden-Württemberg and Bavaria, in the border region with Switzerland and Austria, including the Black Forest. This is Sebald intellectual Heimat, as he studied at the University of Freiburg and later lived in St. Gallen for a year.

A Place in the country is a collection of essays about Johann Peter Hebel, Jean-Jacques Rousseau, Eduard Mörike, Gottfried Keller and Robert Walser, with an additional essay about the artist Jan Peter Tripp. Most of these authors are considered marginal, for once, because Hebel wrote in a German dialect which is very hard to understand, and Mörike is considered a minor German author. In almost all essays, Sebald pays more attention to the authors' troubled lives than to their literary production, and in the case of Rousseau Sebald seeks proximity to the author through the experience of the land, the small island and the monastery where Rousseau lived, a place Sebald often visited.

Another feature that binds these authors is that they were all outsiders, particularly in the case of Keller and Walser pathologically. They were introverted people who shied away from contact, which in the case of Walser even found expression in the form of a nearly impossible to deciphre micro script.

Most of the essays are easy to read, as they focus more on biographical detail than on literary features. However, at the beginning of several of the essays, there are cryptic references to historical figures. Thus, the essay about Mörike begins with a reference to Napoleon, "and his precursor, thre trailblazer with the red Phrygian cap" (p. 69). In some of the essays the author uses unnecessary difficult terminology, for instance hinting at "Hebel's particular fondness for the paratactic conjunctions" (p.17). There are several long quotations in "Alemannic" dialect from Hebel and Sebald often uses french quotations or references. For a German author, it would be more logical to use the German place names than the French, but in many places Sebald apparently prefers "Lac de Bienne over "Bieler See. Although they are small details, they lend the essays a somewhat artificial type of erudition, which seems characteristic of Sebald's writing style. In the English edition of A Place in the country most of these difficulties have been smoothed by the translator / editor Jo Catling who has also provided and excellent introduction, translator's notes, and bibliography. The translation is excellent, with dialect passages quoted in full plus translation in brackets, but where needed, essential terminology is retained in German, and explained in notes.

It was the aim of the author to create "a beautiful book", and this aesthetic sense has been retained in the English edition. The text is richly illustrated, containing several large full-colour plates of contemporaries of the authors. The cloth edition of Hamish Hamilton (Penguin Books) is a gorgeous volume, and the beauty of the book greatly enhances the pleasure of reading it.
Show Less
4 more
LibraryThing member Tomleesteenboek
less impressive than Austerlitz and the rings of Saturn, but the portrait of Robert Walser is one of the most beautiful things I've ever read. I was completely overwhelmed.
LibraryThing member jonfaith
The mistake we always make as listeners is to imagine that these miracles of composition, language and music are drawing directly upon their natural heritage, whereas in fact they are the most artificial thing about it.

Measured and strange. I felt an unexpected peace when reading these essays.
Show More
There was a shadowed forbearance at play---if only within myself. The careful apprehension in each essay is a point of contemplation, despite the assurances from the author that these are "glosses" from alleged "margins". Aside from the looks at Rousseau and Walser Sebald walks in some strange territory, though with signature estrangement.

There's parenthetical charm in books of authors on other authors, I was exclaiming my joy in such when in the essay on Walser, Sebald notes the similarity of Walser with the Gogol studied by Nabokov. He stole my thunder, I screeched with a bootless cry. I am actually barefoot, its hot as hell outside.
Show Less
LibraryThing member m.belljackson
My favorite parts of A PLACE IN THE COUNTRY revolve around W.G. Sebald's questions about understanding meaning and the universe,
as well as Rousseau's use of cards, echoed in Roscoe Mitchell's composition "Cards."

Memorable quotes include: "the brink of the abyss" (Hello, January 6th) and "the
Show More
pathological aspect of thought."

Erudite and inspiring, yes; also reverberates with a depressing focus on death...
Show Less
LibraryThing member jwhenderson
A self-portrait from one of the great authors of the twentieth century. It includes essays on some of the writers and artist who influenced Sebald's life and career as a writer.
Fewer