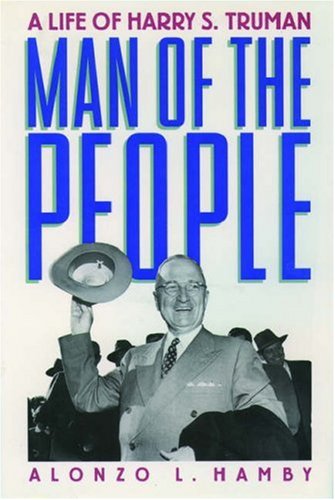 Man of the People: A Life of Harry S. Truman

Harry S. Truman is remembered today as an icon--the plain-speaking president, "Give 'em Hell Harry," the chief executive who put "The Buck Stops Here" on his desk. But Alonzo L. Hamby shows that there was more to Truman than the pugnacious fighter so prominent in popular memory. Insecure,ambitious, a man of honor, a partisan loyalist, an agrarian Jeffersonian Democrat who became a champion of big government, Truman was a complex figure who fought long and hard to triumph over his own weaknesses. In Man of the People, Alonzo L. Hamby offers a gripping account of this distinctively American life, tracing Truman's remarkable rise from marginal farmer in rural Missouri to shaper of the postwar world. Truman comes alive in these pages as he has nowhere else, making his way from the farmhouse,to the front lines in France during World War I, to the difficult small-business world of Kansas City--all the time struggling with his deep feelings of inadequacy and immense ambition. Hamby provides an honest, incisive look at the rising politician's relationship with Kansas City political bossTom Pendergast, who sponsored his career from the county court to the U.S. Senate. We see how Truman, a ferocious and skilled fighter in factional party battles, tried to balance his sense of honor with his political loyalties. Free of corruption himself, he nevertheless refused to repudiatePendergast even when the boss was sinking under the weight of his ties to organized crime. Hamby also offers the best account yet of Truman's critical years in the Senate, covering not only his World War II probe of the defense program but also his neglected and revealing populistic investigationsof the railroads during the 1930s. He demonstrates that Truman was one of the most popular and respected members of the upper house. Hamby is particularly acute in his portrait of Truman's volatile presidency. He criticizes some aspects of the decision to drop the atomic bombs against Japan but concludes that, considered in context, the act was understandable and justified. Providing new insight into the Cold War, he identifiesthe Turkish and Iranian crisis of 1946 as crucial turning points in Truman's attitudes toward the Soviet Union. Thoroughly covering Truman's struggle for "liberalism in a conservative age," Hamby also sheds great light on the president's Fair Deal domestic program. Harry Truman, Hamby writes, was a flawed man--insecure, often petty and vindictive--yet one of the great presidents of the twentieth century. But Americans cherish him less for what he did than for who he was: an ordinary person who worked his way up the political ladder to the summit of power.In Man of the People, Alonzo L. Hamby provides a richly perceptive biography, giving us the best look yet at who Truman was, how he changed, and why he triumphed.… (more)