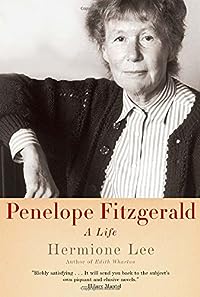 English writer "Fitzgerald, born into an accomplished intellectual family, the granddaughter of two bishops, led a life marked by dramatic twists of fate, moving from a bishop's palace to a sinking houseboat to a last, late blaze of renown. We see Fitzgerald's very English childhood in the village of Hampstead; her Oxford years, when she was known as the 'blonde bombshell'; her impoverished adulthood as a struggling wife, mother, and schoolteacher, raising a family in difficult circumstances; and the long-delayed start to her literary career"--Amazon.com.

LibraryThing member RandyMetcalfe
Surely it is the case that the life of a writer — even a writer who primarily comes into her own late in life as was the case for Penelope Fitzgerald — is to be found in her writing. Fitzgerald did not publish her first book until she was sixty. Thereafter she rapidly rises the ranks of British writers with one enigmatic, thoughtful and typically humorous short novel after another. In less than twenty years, she was being referred to by some as the greatest living British writer. By the time of her death in April 2000, there were very few dissenters. Of course, whilst the novels, biographies (she wrote three at the outset of her ‘writing’ career), short stories and numerous reviews and other various writings may constitute ‘a life’, there can be little doubt that Penelope Fitzgerald also lived another life before her writing life began. Fortunately, or unfortunately, these lives tend to merge since a number of her early novels draw substantially on her personal experience.

Hermione Lee gives in to the temptation to read Penelope Fitzgerald’s life through her novels (as well as the biographies). So much so that in early chapters of this biography, she incorporates sizeable quotations from those early novels in order to flesh out the story that she is telling about Fitzgerald’s life during the WWII, and onwards through the 1950s and 1960s. It is a risky technique since it leads to also reading Fitzgerald’s life through the novels that do not explicitly draw upon her personal experience. And that makes it somewhat hard to judge the biographical aspect of Lee’s biography. Unlike a writer such as Jane Austen, much of Fitzgerald’s life before and outside of her writing is available to the biographer. Perhaps a literary biography would have been a better fit rather than attempting the life as a whole.

The writing here is workmanly. There are plenty of facts to report and a whole host of characters, some of whom have been worthy of biographies of their own, to introduce and engage with. And yet, at the same time, it feels thin. As though the writing were waiting for some breath of life that never quite arrives. Perhaps what I am noticing is the difference between a life treated as biography and a life as fiction. Certainly Fitzgerald’s novels never lack this breath of life. And as such I would recommend them, every one, more than this life. Indeed, what the lover of Fitzgerald’s fiction will long for here is precisely what her death makes impossible — a Fitzgeraldian treatment of her life as a whole. Failing that, we shall have to make do with what we have. And that is no small thing.… (more)
3 more
LibraryThing member theaelizabet
Penelope Fitzgerald was elusive and private. Novelist A.S. Byatt, who for a time was a teaching colleague of Fitzgerald, explained as much to biographer Hermione Lee:

Antonia Byatt found her contradictory. She could be sharp; she could appear vague and self-effacing; she was also knowledgeable, perceptive and generous. “She was interesting to know, but not easy to get to know well….” Byatt hugely admired her work, and gradually came to think of her as “one of the major writers of my time.” But remembering their period together as colleagues, she thought that Fitzgerald was “not a nice person. Geniuses are not nice people.”

Lee ably takes the reader through the sweep of Fitzgerald’s life. Born during WWI, Fitzgerald came from an accomplished family; her father was the editor of Punch magazine, one of her uncles was a member of the Bletchly Park team that conquered the Enigma machine during WWII. Known both as “The Blonde Bombshell” and as incredibly smart during her Oxford years (legend has it that Fitzgerald not only “got a First,” but that her papers were “…so outstandingly good they were kept and bound in vellum by her examiner…”), she eventually ended up as a BBC producer and scriptwriter during and after the second world war. Post-war, she married an Irish army officer, had three children, co-edited a literary magazine with him for three years (World Review) and then had it all crash down around her when his alcoholism and serious trouble with the law made them destitute. They lived for many years in council housing while the family scraped by largely on her teaching income (she taught for 26 years). Lee is especially good at contextualizing and exploring Fitzgerald’s work, influences and relationships (which were mainly with family members, but also those few friends with whom she became close, especially writers J.L. Carr, Stevie Smith, and later Penelope Lively).

I’m reading Fitzgerald in order so next up for me will be her third
book [Offshore], a story inspired by the time she and her family lived on a houseboat on the Thames because it was all that they could afford. (In real life, the boat sank, taking all of their possessions with it. She still showed up to teach on the day that it happened.)

Offshore was awarded the Booker Prize in a year where many thought V.S. Naipul would win for A Bend in the River. Lee describes a BBC program about the prize that year as being “breathtakingly condescending” toward Fitzgerald. Host Robert Robinson, “…evidently thrown by not having the big beasts he had expected, and by being presented a with a winner he had clearly never heard of, or read, steers the conversation, in his best patrician manner, with many jokey remarks…into a general discussion about literary prizes. He begins by proposing…that “the Booker judges had made the wrong choice” and that the “best book didn’t win….” Did she have a view of what a novel should be?

“That’s the scandal about novels, isn’t it?” she replies. “That they don’t have any classical models. But I would say it started as soon as people realized that it was dark as night—that it was dark outside. And they felt that they would like a story told them. And that’s what novels are for.”

Blankly uncomprehending, Robinson lumbers on: “But don’t you think it must deliver something of importance to everyone?” “No, I don’t,” she answers, just for a moment allowing sharpness through. “I think it’s that, for the time being, you forget that it’s dark outside.””… (more)
LibraryThing member sonofcarc
Penelope Fitzgerald was the best novelist in English in the 20th century. There, I said it.
LibraryThing member gayla.bassham
Beautifully written life of a British novelist. Hermione Lee really brought Fitzgerald to life and by the end I felt a real kinship with her. I've only read The Gates of Angels, but I'm now curious to read some of her other fiction. Highly recommended if you enjoy literary biographies.
Fewer