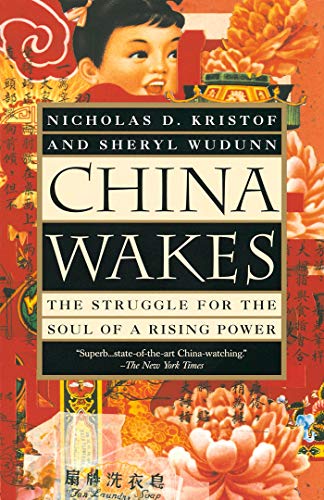 China Wakes: The Struggle for the Soul of a Rising Power

""When China wakes, it will shake the world," Napoleon Bonaparte once remarked. That moment is now at hand. And in this book Nicholas D. Kristof and Sheryl WuDunn, the Pulitzer Prize winning Beijing correspondents of The New York Times, bring to life the people, the politics, and the paradoxes of China as never before. China Wakes combines groundbreaking reportage with the authors' personal account of how they came to discover the human stories within the world's most populous nation. Attracted by China's potential for greatness and repelled by its propensity for cruelty, Kristof and WuDunn struggle to reconcile their optimism about China's future with the brutality that always seems to break their hearts." "In the pages of China Wakes, the story of China's economic takeoff unfolds before us like passages from a great novel. Kristof and WuDunn, the first married couple ever to win a Pulitzer for journalism, take us with them to meet their friends (and enemies) and share their concerns - especially WuDunn's ambivalence about how, as a Chinese-American, she must come to terms with the legacy of her ancestral homeland. WuDunn takes us along as she slips into a China usually hidden from foreigners, a China of cabinet ministers making unwanted advances on local women and of peasants who cannot afford pants for their children. We also accompany Kristof as he witnesses Chinese troops massacring protesters at Tiananmen Square and later comes face to face with the man who betrayed the leaders of the democracy movement to the police." "With the Chinese economy (the world's third largest) on a trajectory to overtake Japan and the United States in the coming decades, Kristof and WuDunn describe a spectacular economic boom that has enabled a twenty-three-year old to start his own airline or a manual laborer to become a millionaire furniture manufacturer. But they also reveal the chilling paradox lurking beneath these rags-to-riches stories: despite the stock markets and the cellular telephones, China has retained its totalitarian infrastructure, including the notorious "shackleboards" to which dissidents are strapped and brutally tortured. And with the world's largest army, the People's Republic continues to embody a tremendous challenge to the stability of the Pacific Rim." "Never before has China been portrayed so compellingly or with such feeling. As this great nation stands poised to fulfill Napoleon's prediction, China Wakes is an indispensable guide to the rumblings ahead."--BOOK JACKET.Title Summary field provided by Blackwell North America, Inc. All Rights Reserved… (more)

LibraryThing member autumnesf
Good book written in the 90's about 2 journalist living in China. Very interesting read.
3 more
LibraryThing member jontseng
Over a decade later this is still some of the most perceptive writing on China in the English language. Essential for China-watchers. Many of the issues the authors' finger are still very live today.
LibraryThing member aliform
Two amazing multi-cultural journalists bring modern day China into view through a series of bizarre and compelling true stories.
LibraryThing member jostie13
This is not a good book. I don't know very much about China at all, but it was hard to trust these writers because the claims they made about the West were so off-base that I couldn't imagine that their grand and weirdly reductive claims about China were any more perceptive. This book was recommended to me by a friend and my favorite part of reading it was taking photos of insane passages and sending them to him as punishment.… (more)
Fewer

Oracle bones : a journey between China's past and present by Peter Hessler
Out of Mao's shadow : the struggle for the soul of a new China by Philip P. Pan
Wild swans : three daughters of China by Jung Chang
The man who stayed behind by Sidney Rittenberg
The new emperors : China in the era of Mao and Deng by Harrison Evans Salisbury
1 more
Nixon and Mao : the week that changed the world by Margaret Olwen Macmillan
Fewer