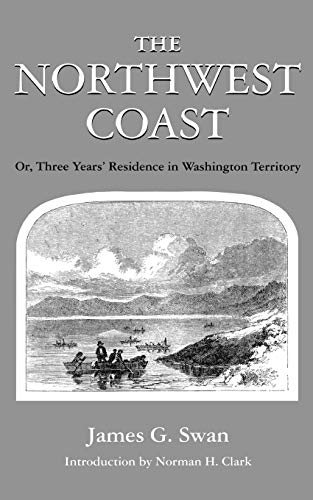 The Northwest Coast: Or, Three years' Residence in Washington Territory

In 1849 James Swan turned his back on his wife and two children, a prosperous ship-fitting business, and the polite and predictable world of commerce in Boston and fled to the newly opened gold fields in California. Soon sick of the bonanza society, he emigrated to a shallow harbor called Shoalwater Bay (now Willapa Bay) north of the Columbia River in Washington Territory. Swan eagerly became a part of the frontier community, enjoying the company of both the white settlers and friendly Indians in the area. First published in 1857, his classic account of the western frontier remains fresh and timely for the modern reader. Swan saw himself as both an observer and participant in a barbaric invasion. His interest in the Indians and his acceptance of them as individuals of importance and integrity emerge clearly in a lively and informed narrative.… (more)

Skid road : an informal portrait of Seattle by Murray Cromwell Morgan
The Canoe and the Saddle; or, Klalam and Klickatat by Theodore Winthrop
The last wilderness by Murray Cromwell Morgan
Oysterville : roads to grandpa's village by Willard R. Espy
Washington : a centennial history by Robert E. Ficken
20 more
Indian legends of the Pacific Northwest by Ella E. Clark
Exploring Washington's past : a road guide to history by Ruth Kirk
Washington State place names by James Wendell Phillips
The Collector : David Douglas and the Natural History of the Northwest by Jack Nisbet
Puget's Sound : a narrative of early Tacoma and the southern Sound by Murray Cromwell Morgan
Northwest Explorations by Gordon Speck
The Fourth Corner: Highlights from the Early Northwest by Lelah (Jackson) Edson
The Natural History of Puget Sound Country by Arthur R. Kruckeberg
Washington State by Charles Pierce LeWarne
Island Year by Hazel Heckman
The Good Rain: Across Time and Terrain in the Pacific Northwest by Timothy Egan
Island in the sound by Hazel Heckman
Tragedy of Leschi by Ezra Meeker
Washington Territory by Robert E. Ficken
Pig War islands by David Richardson
The untamed Olympics; the story of a peninsula by Ruby El Hult
Coast country; a history of southwest Washington by Lucile Saunders McDonald
Seattle: Then & Now by James Madison Collins
Wintergreen: Listening to the Land's Heart by Robert Michael Pyle
Winter Brothers: A Season at the Edge of America by Ivan Doig
Fewer