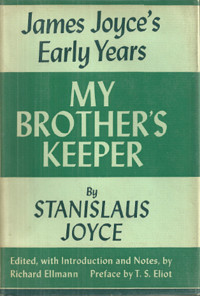 Stanislaus Joyce was more than his brother's keeper: he was at various times his brother's co-dependent, touchstone, conscience, and biggest fan. The two shared the same genius, the same childhood influences, and had the same literary instinct, but in Stanislaus it was channeled into sober academic pursuit, while in James it evolved into gaiety, wild whimsy, and at times sodden despair.Covering the first twenty-two years of James Joyce's life in Dublin and Trieste, My Brother's Keeper is a window onto the drama that was his youth. Thanks to Stanislaus's superb memory and sure hand, here we find the Dublin of Dubliners: the streets, neighbors, churches, and unforgettable eccentrics. Here we see the model for Ulysses' Simon Dedalus: James' father, a dour and violent figure when in his cups. Here are the Joyces in their own home, and the minor characters that pepper A Portrait of the Artist: Eileen, Leopold Bloom's comely daughter; Mrs. Riordan, the surly teacher; Mr. Casey, the political agitator. And finally, here is Trieste, a place of exile for Stanislaus but a retreat for James. Stanislaus Joyce has fashioned both an invaluable primary source for his brother's opaque masterpieces and a loving memoir of his brother's early life.… (more)

James Joyce by Richard, Ellmann
Nora: A Biography of Nora Joyce by Brenda Maddox
Three Days with Joyce by Gisèle Freund
Portraits of the artist in exile : recollections of James Joyce by Europeans by Willard Potts
Damned to fame : the life of Samuel Beckett by James Knowlson
1 more
Finnegans wake by James Joyce
Fewer