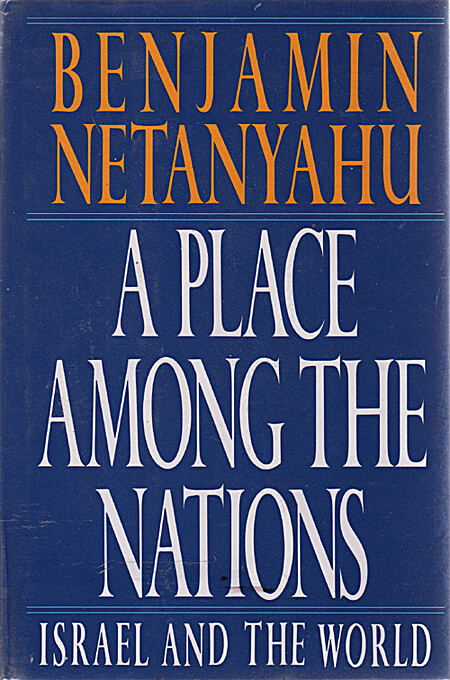 A Place Among the Nations: Israel and the World

"Frequently interviewed in the American news media, well known to viewers of programs such as Nightline and Face the Nation, Benjamin Netanyahu is one of Israel's best-known leaders. In this evocative and meticulously researched book, five years in the making, he traces the origins, history and politics of Israel's relationship with the Arab world and the West. He provides the most clear-sighted view yet of Israel's precarious situation among the Arabs - and lays out his own ideas for peace in the Middle East." "During the Gulf War, Mr. Netanyahu, then Israel's deputy foreign minister and its former ambassador to the United Nations, showed a CNN reporter a map of the Middle East. "Here's the Arab world," he said, "walking" his wide-open hands across its breadth." ""And here is Israel," he went on - easily covering the entire country with his thumb." "How is it that this minuscule Jewish state, 40 miles wide including the West Bank, has become the hostile target not only of an Arab world more than 500 times its size but of so much of the West? How is it that a small nation, whose historical right to its homeland was recognized by international consensus at the beginning of this century, now finds the legitimacy of that commitment scorned and eroded? How has the only democracy in the Middle East become the focus of western criticism of the kind never directed at the surrounding Arab tyrannies?" "Mr. Netanyahu punctures the myriad falsehoods leveled against Israel today by using the facts of history, ancient and modern, to establish his country's case forcefully. He demonstrates the ways in which the Arabs, abetted by much of the world, have forced Israel to shrink to one-fifth the size of the national home originally promised to the Jewish people. He scrutinizes the tactics of the Arab regimes in fabricating the "Palestinian question" to disguise their own aggressive designs. And he unmasks the PLO, vividly documenting startling PLO statements and strategies regarding Israel never before exposed in the West." "An enduring peace between Arabs and Israelis is attainable, Mr. Netanyahu argues - but only if it takes into account the nature of Middle Eastern politics and the volatile forces within Arab and Islamic society. In a powerfully argued summation sure to startle Jews and non-Jews alike, he proposes a sweeping reevaluation of the Jewish attitude toward political realities, tempered by experience and avoiding the extremes of utter passivity and fatalistic defiance, that can do much to assure the Jewish state a position of permanence among the nations." "Certain to be controversial, this book is a passionate, closely reasoned work of contemporary history and current affairs, shattering in its revelations, news making in its proposals, and inspiring in its message."--BOOK JACKET.Title Summary field provided by Blackwell North America, Inc. All Rights Reserved… (more)

Righteous victims : a history of the Zionist-Arab conflict, 1881-1999 by Benny Morris
Pioneer Jews : A new life in the Far West by Harriet Rochlin
Blaming the victims : spurious scholarship and the Palestinian question by Edward W. Said