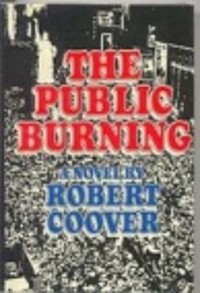 A controversial best-seller in 1977, The Public Burning has since emerged as one of the most influential novels of our time. The first major work of contemporary fiction ever to use living historical figures as characters, the novel reimagines the three fateful days in 1953 that culminated with the execution of alleged atomic spies Julius and Ethel Rosenberg. Vice-President Richard Nixon - the voraciously ambitious bad boy of the Eisenhower regime - is the dominant narrator in an enormous cast that includes Betty Crocker, Joe McCarthy, the Marx Brothers, Walter Winchell, Uncle Sam, his adversary The Phantom, and Time magazine incarnated as the National Poet Laureate. All of these and thousands more converge in Times Square for the carnivalesque auto-da-fe at which the Rosenbergs are put to death. And not a person present escapes implication in Cold War America's ruthless public burning.… (more)

LibraryThing member slickdpdx
"I am asking everyone tonight to step forward - right now! - and drop his pants for America!"

Some music writer (Lester Bangs? Byron Coley?) said the VU had a lot to answer for, having spawned generation after generation of poor imitations. The Public Burning is a book that never could have been written if Joyce had not first produced Ulysses. Three days instead of one. Nixon as Bloom. It could be execrable. However, Coover pulls it off quite nicely.

The overheated Prologue is the weakest section of the book. If you make it past that bit, you will find yourself engaged with a suprisingly immersive and creative tome. Lots of vernacular and pomo done very well. And, notwithstanding that, a lot of forward momentum in the story line.

Readers tend to focus on the politics, but this is first and foremost a Coover take on Ulysses and Finnegans Wake that happens to use as its subject matter Nixon/Rosenberg, not a polemic dynamiting fish in a barrel. Coover does an incredible job conjuring up a radically subjective sense of the reality of the Cold War era as experienced by the Nixon crowd at the same time he parodies it and lays it low. Without that, I don't think the book would be half as interesting, the parody would not work for long and even the constant verbal pyrotechnics and storytelling tricks would lose their lustre.… (more)
2 more
LibraryThing member MeditationesMartini
There's a bit of a comfort curve with this one, as outlined aptly in the otherwise gassy introduction by William H. Gass: we're used to seeing Nixon the caricature, Nixon the cackling supervillain, whereas here we get Nixon certainly the venial, the self-justifying, the puffed up, but also the self-loathing, the sensitive, even the smart and ruefully cynical. Nixon the hero of The Public Burning, is a more fully realized character than Nixon, the actual dude, and if that's an accomplishment it also makes you realize how hard it is to abandon the Nixon in your mind and embrace this confused-but-not-yet-quite-monstrous young striver. One thing this book does is posit the Rosenberg trial as Nixon's supervillain-origin story, and with the grotesque (and slightly homophobic) fate that he meets at the end, and the fact that you know he's gonna go from that into loss to Kennedy and eight years of exile, all of a sudden the Futurama-Nixon who has a robot body and destroys the galaxy seems a lot more possible.

So you can see that this is not a measured recreation of the fears and hates of McCarthy-era America, not a sober repudiation of the great evil done to the Rosenbergs (Coover flirts with representing it as singular or a loss of innocence, which I find just too simplistic and banal for words); no, it's a sneer, a sharp cutter wielded with eyes lit up by malice. (It's also, as others have noted, a weird interpolation of Ulysses.) In that sense it's powerful, and while I don't get too much on board with the Uncle Sam character (spending too much time with caricature can't help but betray a delight in said caricature on the part of the author), I think that he amply demonstrates his purpose in the final symphony of contempt, which starts with a sexy, repulsive, heartbreaking encounter between Nixon and Ethel Rosenberg in the death chamber--weirdly, the most real part of the whole book: if it was all over for you in a world gone topsy-turvy horrid, you'd cling to anyone you could, even your jowly executioner, just to keep on feeling--but then explodes into what's not only an auto-da-fe, the execution of Ethel and her husband live in Times Square, but also a national pageant of shame and celebration building to a nibelungian climax that has to be read to be believed. There's a little too much self-satisfaction visible when the spectacle recedes below the high-water mark to its stupider lows, but hey, that's Uncle Sam's America.… (more)
LibraryThing member jonfaith
I read this as part of a Thomas Pynchon group on yahoo in the late 90s. Apparently I was the onlyone who braved this wicked ride. I recall calling my grandmother and verifying historical details.
Fewer