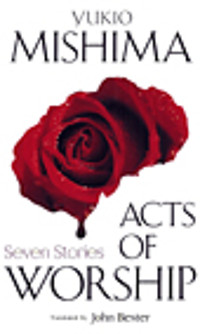 Here are seven stories of psychological insight and eroticism from Japan's most famous writer. Other works by Yukio Mishima which are published by Kodansha include Sun and Steel'. When Mishima committed ritual suicide in November 1970, he was only forty-five. He had written over thirty novels, eighteen plays, and twenty volumes of short stories. During his lifetime, he was nominated for the Nobel Prize three times and had seen almost all of his major novels appear in English. While the flamboyance of his life and the apparent fanaticism of his death have dominated'

Los Angeles Times
These complementary volumes of fiction and nonfiction only confirm his genius.

LibraryThing member amandacb
Mishima began my love of Japanese literature, especially short stories. Japanese literature has a refreshing vein of naturalism and mysticism, and Mishima's stories are prime examples. I used some of his stories to teach themes to tenth graders (especially the rain one, with the rain outside, the water in the fountain, the tears on the girl's face, etc). He's a brilliant short story writer. I also enjoyed his other collection, Death in Midsummer.… (more)
2 more
LibraryThing member poetontheone
In Acts of Worship, Mishima captures the nihilistic despair and complex beauty of characters and settings much like in his longer work. While still containing the essence of his style, the short length of the stories do not allow room for a complete showcase of his talent. Some of the stories are only satisfactory, but others are excellent quality. 'Sword' and 'Act of Worship' stand out boldly among the rest. A worthwhile read for those already acquainted with Mishima's work.… (more)
LibraryThing member dbsovereign
Short stories that serve us up parts of Mishima. Includes many of the same themes found in his books.
Fewer

Death in midsummer, and other stories by Yukio Mishima
Mishima : a vision of the void by Marguerite Yourcenar
A dark night's passing by Naoya Shiga
Teach us to outgrow our madness by Kenzaburo Oe
Kokoro by Natsume Soseki
3 more
Monkey brain sushi : new tastes in Japanese fiction by Alfred Birnbaum
Botchan by Sōseki Natsume
Beauty and Sadness by Yasunari Kawabata
Fewer