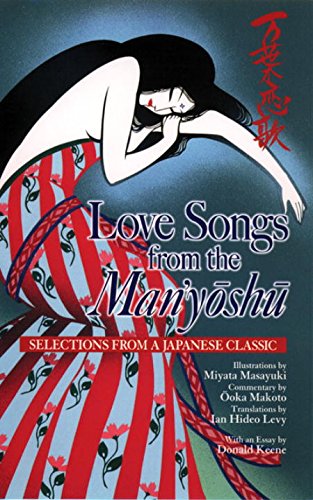 It was the first golden age of Japanese civilization. Suddenly, in the eighth century, there appeared the great metropolis of Nara, its broad avenues lined with magnificent temples. Culture rushed in from Korea, from China, and, over the Silk Road, from as far away as Persia. And in this age Japanese literature found its first voice, a clear and powerful one, in the Man'yoshu. Literally The Collection of the Thousand Leaves,' this sweeping anthology, its poets ranging from emperors to beggars, is often considered the pinnacle of Japanese verse. In'

One hundred poems from the Japanese by Kenneth Rexroth
The tale of genji by Murasaki Shikibu,
Japanese Literature: An Introduction for Western Readers by Donald Keene
A summoning of stones by Anthony Hecht
World Within Walls: Japanese Literature of the Pre-Modern Era, 1600-1867 by Donald Keene
6 more
Kokoro by Natsume Soseki
The Paris edition : the autobiography of Waverley Root, 1927-1934 by Waverley Lewis Root
The world of the shining prince; court life in ancient Japan by Ivan I. Morris
The Nobility of Failure: Tragic Heroes in the History of Japan by Ivan I. Morris
Tell me again how the white heron rises and flies across the nacreous river at twilight toward the distant islands by Hayden Carruth
The pleasures of reading : in an ideological age by Robert Alter
Fewer