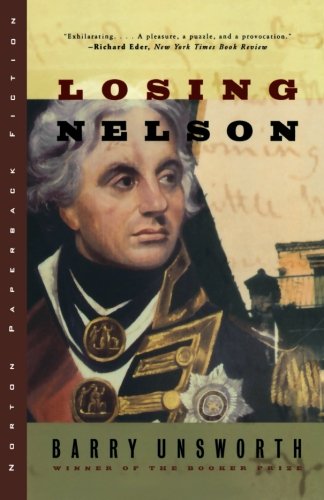 As he writes on Nelson, a British biographer re-lives his battles and romances. But he is obsessed by a black mark against his hero, Nelson's massacre of Neapolitans. The biographer undertakes a trip to Naples and receives an explanation.

LibraryThing member YossarianXeno
Nelson is a fascinating, controversial character, but this book just didn't have anything to hold my interest, I'm afraid. It certainly lost me.
5 more
LibraryThing member stubbyfingers
I found this book to be pretty snoozeworthy most of the way though. The story is told from Charles Cleasby's point of view, a crazy man with elements of OCD and paranoia and other stuff thrown in. He's severely obsessed with Lord Horatio Nelson and is in the process of writing Lord Nelson's biography. But in his hero worship, Charles cannot accept that Lord Nelson may have done anything dishonorable and is particularly devoted to clearing Lord Nelson of any wrongdoing in the events surrounding the Parthenopaean Republic of Naples in June 1799. Most of this book is taken up by Charles alternately dictating Lord Nelson's biography and being OCD. Three hundred pages later something different happens. And then the last two paragraphs left me slack-jawed. Mostly boring, I wouldn't recommend this, but if you happen to be particularly interested in Horatio Nelson or find that you've started reading this book for some other reason, don't skip the end. While it didn't, in my eyes, make the rest of the book worthwhile, the ending definitely puts a more interesting spin on it.… (more)
LibraryThing member miketroll
Stunningly imaginative, gripping.

At one level a decent biography of Nelson, the great British naval hero [sorry Copenhagen, we love you but we we love him too!].

But this is a novel, a tale of obsession. The central character identifies himself utterly with Nelson, with appalling consequences.… (more)
LibraryThing member technodiabla
Losing Nelson is about many things: OCD personalities, the creation of heroes, the hero ego, feminine vs. masculine interpretations of events, the effects of bad parenting, and of course British sea battles around 1800. I found it to be exceptionally well written and even though I am generally bored to tears by battle scenes, I found Unsworth's to be more palatable and interesting than most. The most brilliant part of this book though is the masterful character depiction of Charles Cleasby. His disfunction, obsessions, and painful interpersonal skills were perfect. Odd as he was, I felt I completely understood who he was and how he came to be that way. His flashbacks to his childhood were particularly haunting.

I recommend this book to most readers who appreciate a slowly paced but well done work of literature. 4 stars… (more)
LibraryThing member teckelvik
I saw this at the library just after I put it on my wish list, and took that as a sign. I checked it out and read it, and enjoyed it.

The conceit is that a contemporary Englishman, Charles Cleasby, is writing a biography of Nelson, and we see him as he struggles with the fact that Nelson was not perfect. This is a problem, because he has set Nelson up as a paragon, a special person, one of those people who move and change history, and while ordinary rules of conduct don't apply to such people (see: insubordination, Lady Hamilton), they also don't get involved with massacring innocents and murdering innocent men (see: Parthenopaean Republic, Caracciolo). The book follows his efforts to come to terms with what really happened.

Without a doubt, the best part of this book are the passages from Nelson's "biography." Cleasby is trying to convey the emotional resonance of Nelson, and these passages bring vivid immediacy to incidents from Nelson's life. They are beautifully written, and show a deep familiarity with the period, the characters in the historical drama, and how everything fits together.

The weakness is that Cleasby himself is not very interesting, his daily life is not very compelling, and the story of his life, told as flashbacks explicitly parallel to Nelson, just isn't much. I also thought that the ending was disappointing. I'm trying to avoid spoilers, but it felt very cliched. I think that a historical novel about Nelson himself, instead, would have been riveting. (But perhaps the author didn't want to cover the entire life, just those few scenes?)

At any rate, this was definitely above average, and I'd recommend it.… (more)
LibraryThing member isabelx
Think of that quarter-deck. At the forward end, looking across the waist to the forecastle, there was only an open rail. That is where your Horatio stood. Think of him there, dressed impeccably, full uniform, cocked hat, silk stockings, buckled shoes, Immaculate. Unoccupied, fully aware of his danger, carnage all around him. Like a rock, Charles, like a rock. That is the way, that is the way forward, Horatio is your lifeline, stay with him, he will get you out and about. Join the Nelson Club, there must be one - in London there is a club for everything under the sun. I'll get my secretary to find the address.

As a child Charles Cleasby became interested in Lord Nelson, encouraged by having a schoolteacher who was a Nelson buff, but his interest faded during his teens. When he had a nervous breakdown at university and refused to leave his room at all, his psychiatrist suggested that he take up his hobby again, as a way of rekindling his interest in life, but unfortunately his hobby developed into an all-consuming interest, and Charles started to see himself as Nelson's other half.

He never went back to university or got a job, and at the age of fifty he is a virtual recluse living in the house he inherited from his father, and his only social life is attending the twice weekly meetings of the Nelson Club in Bloomsbury. He keeps a large collection of Nelson memorabilia in his basement, where he also re-enacts all of Nelson's battles on their anniversaries, even if that means getting up before dawn to start the battle on schedule, moving his model ships across the glass table in the basement at the exact time they did so in the real battle.

When he employs a secretary to come in twice a week to help him with the biography of Nelson that he is writing, he is perturbed by her wilfulness in seeing Nelson as a vain man, interested in money and honours, who cares nothing for the lives of his men, rather than as the patriotic hero revered by Charles as a bright angel. What makes things worse is that he has just reached a very difficult point of the book, when he has to decide how to approach the events in Naples in June 1799 which may not show Nelson in a good light at all. I seem to remember reading something else in which the exact meaning of the word embark is vital.… (more)
Fewer