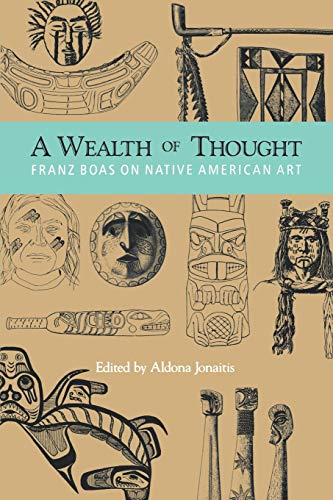 A Wealth of Thought: Franz Boas on Native American art

In the nineteenth century, scholars who wrote about art of native peoples assumed that all art lay on a continuum from primitive to advanced: artworks of all nonliterate peoples were therefore examples of early stages of development. Boas was familiar with evolutionary theory in both the European and American art literature, and he set about to dispute much of what his contemporaries held as truths. Case studies from his own fieldwork on the Northwest Coast of North America demonstrated different tenets: the variety of history, the influence of diffusion, the symbolic and stylistic variations in art styles found among groups and sometimes within one group, and the role of imagination and creativity on the part of the artist. Aldona Jonaitis has chosen fourteen articles, written during the period from 1889 to 1916, to reveal Boas's intellectual development as an art historian. The subjects of his first analyses were the paintings and carvings of Northwest Coast Indians, primarily the Kwakwaka'wakw, the people he called the Kwakiutl. Later he went beyond the Northwest Coast to interpret other Native American artworks, and began to investigate the influence of psychology on art. This volume includes Boas's most significant writings on art, many originally published in obscure sources now difficult to locate. The essays are illustrated with their original photographs and drawings, and the collection is supported by an extensive, combined bibliography at the end of the book.… (more)