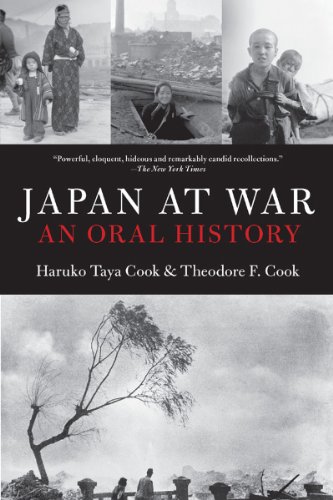 Japan at War: An Oral History

This pathbreaking work of oral history captures for the first time ever - in either Japanese or English - the remarkable story of ordinary Japanese people during World War II. In a sweeping panorama, Haruko Taya and Theodore Cook take us from the Japanese attacks on China in the 1930s to the Japanese homefront during the inhuman raids on Tokyo, Hiroshima, and Nagasaki, offering the first glimpses of how this century's most violent conflict affected the lives of the Japanese population. Japan at War documents a huge range of experiences, from long-ago memories of being taught to play at soldiering in school to personal accounts of carrying out horrendous medical experiments and ruthless massacres. Here are the soldiers and sailors caught in the jungles of New Guinea and on the seas around the Philippines. Here, too, are proud builders of the Burma railway, and unrepentant generals, as well as conscripts whose political or intellectual training made them unwilling participants in the horrors wrought by their country. Japanese newspapermen, filmmakers, artists, cabaret dancers, and diplomats speak candidly about their wartime experiences, adding a whole new dimension to the now-famous symbols of kamikaze pilots and human torpedoes. As they crisscrossed Japan seeking out survivors of a war that cost that country over 3 million lives, the authors encountered every form of human response: those who held to their principles and those who gave in to opportunism, those who controlled events as well as the many - including women and children - who were caught up in the horrific whirlpool. No book to date has captured the complex range of Japanese experiences and emotions as does Japan at War. This is a monumental work of history - one to which Americans and Japanese will turn for decades to come.… (more)

LibraryThing member BooksForDinner
Written by my Japanese History professor, a collection of interviews done with survivors of The Greater East Asian War from all walks of life, from peasants to high ranking government and military officials. Excellent oral history.
1 more
LibraryThing member jamespurcell
Very well done picture, from oral histories, of the mental state and beliefs of the varied strata within the Japanese People cum WW2. Penetrative insights into the pervasive propaganda and motivation that emphasized the feelings of frustration and bitterness used to justify the very aggressive warlike policies and actions of their militaristic regime. The two authors used their unique backgrounds to aptly portray a society little understood in this period by the vast majority of Occidental politicians and military leaders. They collected, organized and presented these data to tell its own story and did it extremely well.… (more)
Fewer

With the old breed, at Peleliu and Okinawa by E. B. Sledge
A Battle History of the Imperial Japanese Navy, 1941-1945 by Paul S. Dull
The Rising Sun: The Decline and Fall of the Japanese Empire, 1936-1945 by John Toland
The Pacific War, 1931-1945: A Critical Perspective on Japan's Role in World War II by Saburō Ienaga