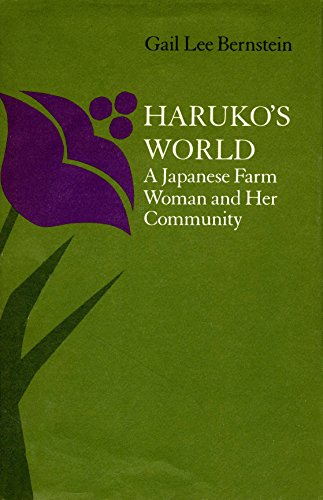 Haruko's World: A Japanese Farm Woman and Her Community

In Japan as in the United States, family farming is on the wane, increasingly rejected by the younger generation in favor of more promising economic pursuits and more sophisticated comforts. Yet for centuries past, the village and the family farm have constituted the world of the vast majority of Japanese women, as of Japanese men. The dramatic economic and demographic developments of the past two decades have orced extensive changes in the lives of Japanese farm women, many of hwom have been left virtually in charge of their family farms.This book is a study of Japanese farm women's lives in the present era: its central figure is 42-year-old Haruko, a complex, vibrant woman who both exemplifies and makes a mockery of the stereotype of Japanese women. Through Haruko we learn the work routine, family relationships, and social life of the women who are the mainstay of Japanese agriculture. Other women from Haruko's village also figure in the story, and the author's observations of them, based largely on a six-month stay with Haruko and her family in 1974-75, are supplemented with data from questionnaires and personal interviews.An epilogue recounts the author's return to Haruko's village in 1982 and describes the changes that have occurred since 1975 in the lives of Haruko's family and other village women. The book is illustrated with photographs.… (more)

Geisha by Liza Crihfield Dalby
To Live and to Write: Selections by Japanese Women Writers, 1913-1938 by Yukiko Tanaka
Neighborhood Tokyo by Theodore C. Bestor
Japan's High Schools by Thomas P. Rohlen
The Chrysanthemum and the Sword: Patterns of Japanese culture by Ruth Benedict
2 more
Japanese inn by Oliver Statler
Looking For the Lost : Journeys Through a Vanishing Japan by Alan Booth
Fewer