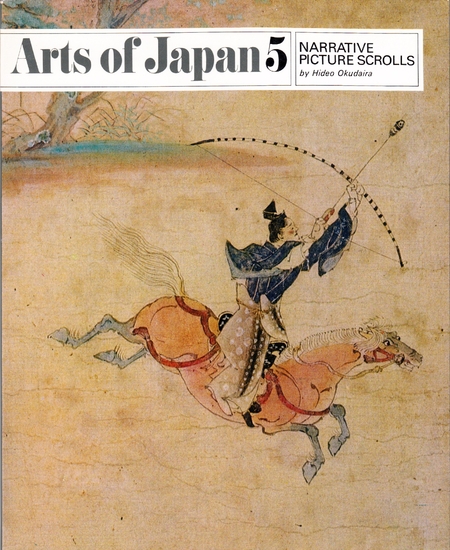 Known as emaki and sometimes ekotoba, these works contain pictures rendered on a handscroll which opens horizontally. In many cases they also contain written explanatory comments (kotobagaki) and are designed to be viewed in sequence when unrolled from right to left. The handscroll made its appearance very early in East Asian pictorial art, and Japan's emaki are derived from Chinese models. The many e-ingakyo (illustrated sutras of cause and effect) produced in Japan in the 8th century reproduced the text of a Buddhist sutra on the laws of causation (the Kako genzai ingakyo), with appropriate illustrations, and appear to be copies of Chinese originals. Japanese narrative handscrolls developed independently of continental models from the end of the Nara period through the medieval era. They developed in many different ways depending on the period and the subject matter. In the 12th century, the first and most famous of the Genji monogatari emaki depicted important scenes from The Tale of Genji, Japan's first and perhaps most important novel, using very precise brush techniques and brilliant colors. Other emaki were produced to explain to the common people, in a way they could easily understand, legends about the origins of Buddhist temples. One of these was the Shigisan engi emaki, which was drawn with very fluid lines to depict its constantly moving scenes. Produced at around the same time were the Ban Dainagon ekotoba (Scroll of the Courtier Ban Dainagon) and the Choju giga (Scroll of Frolicking Animals). These three, together with the aforementioned Genji monogatari emaki, are known collectively as Japan's "Four Great Emaki." After the 13th century, narrative handscrolls were commissioned and produced by a growing number of people from various walks of life. In addition to handscrolls illustrating miracle tales, works of literature, and accounts of the origins of temples, a genre of handscrolls appeared that reflected the tastes of the warrior (samurai) class. The various Heiji monogatari emaki, which depict battles around the year 1160, are among the best-known of these gunkimono (military tales) in pictorial form. In the medieval age, new Buddhist sects flourished, and narrative handscrolls, though not always of high artistic merit, were often used as a means of proselytization. The Ippen shonin eden (Illustrated Biography of the Monk Ippen) scroll, which depicts the life of Ippen, the founder of one of these new sects, is a work of exceptional quality. The monks of the Dojoji Temple in present-day Wakayama Prefecture often spoke to visitors about the Buddha's virtues while unfurling before them a handscroll depicting the origins and history of the temple, and they custom that is continued to this today.… (more)