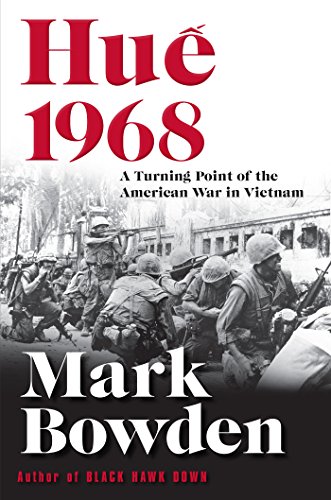 Hue 1968: A Turning Point of the American War in Vietnam

In mid-1967, the North Vietnam leadership had started planning an offensive intended to win the war in a single stroke. Part military action and part popular uprising, the effort included attacks across South Vietnam, but the most dramatic and successful would be the capture of Huế, the country's intellectual and cultural capital. At 2:30 a.m. on January 31, the first day of the Lunar New Year (called Tet), ten thousand National Liberation Front troops descended from hidden camps and -- led by locals like eighteen-year-old village girl and Viet Cong member Che Thi Mung -- surged across the city of 140,000. By morning, all of Huế was in Front hands save for two small military outposts. The American commanders in country and politicians in Washington refused to believe the size and scope of the Front's presence. Captain Chuck Meadows was ordered to lead his 160-marine Golf Company in the first attempt to reenter Huế later that day. Facing thousands of entrenched enemy troops, he reported: "We are outgunned and outmanned." After several futile and deadly days, Lieutenant Colonel Ernie Cheatham would finally come up with a strategy to retake the city, block by block and building by building, in some of the most intense urban combat since World War II. With unprecedented access to war archives in the United States and Vietnam and interviews with participants from both sides, Bowden narrates each stage of this crucial battle through multiple points of view. Played out over twenty-four days of terrible fighting and ultimately costing more than ten thousand combatant and civilian lives, the Battle of Hue was by far the bloodiest of the entire war. When it ended, the American debate over the war was never again about winning, only about how to leave.… (more)

LibraryThing member Stbalbach
The Battle of Hue, one of the longest and bloodiest battles of the war, was characterized by intense urban fighting by Marines who were not well trained for urban combat and as a result they improvised tactics and weapons as they went. It was the inspiration for Full Metal Jacket, for example the scene with the sniper who left victims alive in the street as bait actually occurred. Like most everything about Vietnam it was cruel and surreal. It was a civil war inside a civil war, inside a cold war, a war of civil rights and generational conflict. Bowden does an excellent job placing it into broader context politically. His thesis is that the battle led directly to LBJ declaring he would not seek reelection for a second term, and Walter Cronkite's now-famous report the war was not winnable, which for the first time made opposition to the war acceptable. The book is long and I found the first half a slog. Once the battle is fully in motion it's a montage of scenes and people that together enforce the chaos and relentless fighting. This is a good book for understanding the battle and the war.… (more)
5 more
LibraryThing member LamSon
This was a very good look at one of the most pivotal battles in the entire Vietnam War. Note to publisher: next time, include the index in the book.
LibraryThing member jwrudn
At the end of January 1968, the beginning of the Tet holiday, the North Vietnamese army (NLA) and Viet Cong (VC) launched simultaneous attacks on cities in South Vietnam including Saigon. They had thought that the people would rise up to support them and this would lead to the overthrow of South Vietnamese government. This did not happen and the attacks were mostly suppressed after a few days. However, in Hue, the NLA and VC had managed, in the weeks preceding Tet, to amass 10,000 troops in and around the city without detection. In the early morning of January 31, they over ran the city securing it all except for two small outposts. Vastly outnumbered, the outposts hung on and thus begins a grinding month-long campaign to retake the city. The failure of high command to recognize the number of disciplined, well-trained NLA troops led them to insist repeatedly that the Marines attack against superior odds.

Bowden, the author of Black Hawk Down, describes the battle by following the experiences of the Marines and, to lesser extent, the Vietnamese, who fought it. I had trouble keeping the many participants straight but that made the book no less compelling. It is long, 539 pages, excluding notes, but once I started reading I could not stop. The book is not for the faint of heart: casualties were heavy and deaths to civilians were many; descriptions are often gruesome. The fear, miserable conditions, stench and exhaustion are palpable. In the end, both sides claimed victory, but the battle changed the way Americans thought about the war in Vietnam.… (more)
LibraryThing member RajivC
This book by Mark Bowden is an absolutely stunning one. I am not familiar with the details of the Vietnam war, and this book brings the crucial battle at Hue to life.

It brings it to a life that makes the horrors of war immediate and very real to all of us. The writing is vivid. While he does write from an American perspective, he does show considerable respect for the Vietnamese.

Through the telling of the tale of American bravery, we come across some heroic characters and are reminded of the perfidy of politicians of all hues.

A bullet wound, as one soldier mentions, is not a neat round hole that we see in movies. It is mangled limbs, shattered lungs, skulls blown off. War is shitting in the trenches, not bathing, shaving, living in constant fear that the next minute will be your last.

The men who fight are the ones who deserve glory and respect. They are, sadly, expendable.

This is a brilliant book.… (more)
LibraryThing member jigarpatel
A monumental effort. The first Vietnam analysis I have found which reflects the three parties to the conflict: the National Liberation Front; South Vietnamese and Americans; and the civilians caught in the crossfire.
LibraryThing member muddyboy
A graphic and tremendously well researched book on the battle for the city of Hue which the author sees as the crucial turning point (the Tet Offensive) that will seal America's fate in the Vietnam War. Both sides misjudged the attack - the Communists believing the citizenry would rise up and support them and the American leadership misjudging the abilities and commitment of the North Vietnamese. If there is a villain it is General Westmoreland that feeds President Johnson and the American people over optimistic information throughout. A great study.… (more)
Fewer

Grant by Ron Chernow
Churchill and Orwell: The Fight for Freedom by Thomas E. Ricks
The Age of Eisenhower by William I. Hitchcock