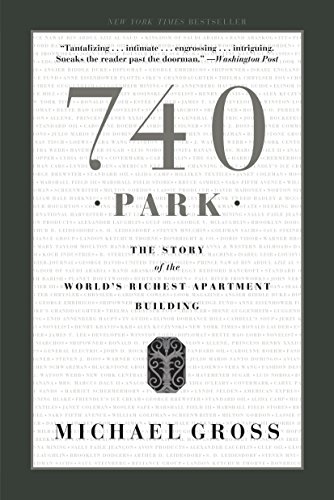 740 Park: The Story of the World's Richest Apartment Building

For 75 years, it's been Manhattan's richest apartment building, and one of the most lusted-after addresses in the world. One apartment had 37 rooms, 14 bathrooms, 43 closets, 11 working fireplaces, a private elevator, and his-and-hers saunas; another at one time had a live-in service staff of 16. To this day, it is steeped in the kind of luxury most of us could only imagine. The last great building to go up along New York's Gold Coast, construction on 740 Park finished in 1930. Once finished, 740 became a magnet for the richest, oldest families in the country. Nowadays, it is bursting with new money, people whose fortunes, though freshly-made, are large enough to buy their way in. At its core this book is a social history of the American rich, but it's also filled with meaty, startling, often tragic stories of the people who lived behind 740's walls.--From publisher description.… (more)

LibraryThing member TheBentley
I almost never fail to finish a book, but I read half of this one and just gave up hope. I was hopelessly bored. If you're extremely interested in the intricacies of the high-dollar real estate game, it may be worth it. It wasn't for me.
4 more
LibraryThing member thebookbabe
Took me about 5 weeks to read this book - not that it wasn't interesting, but it weighs a ton! Too heavy to cart to & from work so I only read it at night before going to sleep. This was a fascinating look at where the rich live, how they live, and how different they are from folks like me. I'd be interested in reading more about some of the people mentioned in the book, but probably won't. I don't read nearly enough non-fiction books and this one was well-written and kept my interest, unlike some NF I've tried in the past.… (more)
LibraryThing member michelesw
740 Park was designed by Rosario Candela, already renowned in NYC for his luxury high rise apartment buildings, which were rapidly replacing the private homes that once lined Park and Fifth Avenues. The builder James Thomas Aloysius Lee, an adventurous property developer, conceived of 740 Park as a cooperative for like-minded wealthy men and their families. (Today, T. A. Lee is probably most famous as Jacqueline Kennedy's grandfather.) The co-op concept did not take hold for Lee, who was forced to rent the units in order to pay the mortgage. In fact, the building never made him a profit. Apartments did not begin to appreciate in value until the mid-'80's and '90's.

The first people to move in were not really the cream of the old NY social crop, however, but men who themselves had made a fortune, or whose fathers' had. Still, they revered the old ways and did not flaunt their wealth excessively. The huge building at 740 Park actually had two entrances, and two addresses. Many of the least ostentatious tenants preferred the 71 Seventy-First Street address. Park Avenue was thought to be "too Jewish." It was fascinating to watch the population of the building change as the years went by. When the UN was built, foreign countries rented space for their representatives and for entertaining. "Black Jack" Bouvier and his sourpuss wife, Janet, were given an apartment by her father, T.A. Lee, who paid the rent for years. Captains of industry were gradually replaced by vulture capitalists real estate moguls and venture capitalists. Philanthropists were replaced by hedge fund managers. A huge number of these high flyers crashed and burned. Many died young, leaving their rich widows behind. If nothing else, this book is a testament to life's uncertainties.

As with many non-fiction books, the author sometimes steps over the line separating fascinating from stultifying detail. There are a few too many paragraphs devoted to how tenant X is connected by family or employment to tenant Y, but I thought that a small flaw compared to the wonderful social history of wealth in 20th C New York.… (more)
LibraryThing member Whiskey3pa
Good reading in the vein of "The Big Spenders", by Lucius Beebe. Not weighty, but interesting look into NY living of a type most people do not experience.
LibraryThing member BookConcierge
Well, after about 50 pages I started skimming. I managed to get through Chapter 16 (page 216), but then I just gave up. It was too boring.
Fewer

Philistines at the Hedgerow : Passion and property in the Hamptons by Steven S. Gaines
Rogues' Gallery: The Secret History of the Moguls and the Money That Made the Metropolitan Museum by Michael Gross
Mrs. Astor regrets: The hidden betrayals of a family beyond reproach by Meryl Gordon
The encyclopedia of New York City by Kenneth T. Jackson