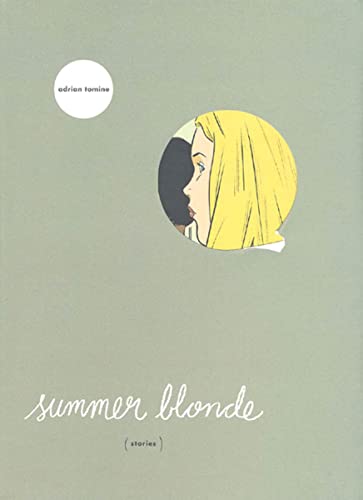 Adrian Tomine's cult comix series Optic Nerve is finally collected into one sharp-looking hardcover graphic novel. Described as the Raymond Carver of comix, Tomine constructs tales of emotional disconnection with an ear for painfully real dialogue. Combined with his deft black and white depictions of urbane lifestyles, Tomine's fans have often accused him of eavesdropping in on their most intimate moments and, with forensic skill, laying their lives bare. The conflicts between emotional gratification, narcissistic neediness and moral discernment mark the title story - "Summer Blonde" - in which a socially crippled man nurses an obsessive crush on a young woman. He watches close up, paralyzed by his guilt, as her beauty catches the eye of his neighbor: a hip, selfish young man with a short attention span. One ofOptic Nerve's most popular stories, `Hawaiian Getaway,` features Hilary, telephone service rep who is having the worst week of her life. She lost her job, her apartment, and her grandmother. Close to the edge, she is losing her grip. Reaching out to random strangers on the phone, Hilary is looking for someone to help her. In "Alter Ego" a successful young author has writer`s block. He can`t, or won`t, decide between another ghostwriting gig and finishing his second 'real' novel. He stalls on committingto his novel and his girlfriend when a chance postcard leads him to flirt with fantasies of changing the past. Finally, "Bomb Scare" documents the early unease of his generation by setting this coming-of-age story during the tense months of the Gulf War, the event that ushered in the 1990s.… (more)

Salon
Tomine is a master of the arts of both cartooning and fiction, and he uses each to complement the other. His panels are meticulously, nearly obsessively perfect, and his freakishly accurate mastery of human facial expressions means that many times, he is able to forgo lengthy plot explication altogether and say it all with spare dialogue and a glance or gesture.

LibraryThing member nagem13
Once I started Summer Blonde, I couldn't put it down. It definitely struck a chord with me. Summer Blonde is actually a collection of 4 short stories told in a graphic novel format. For me, it was basically about lonely people reaching out for human contact in sometimes strange ways. It made me very thankful that I have a few people in my life that I feel like really "get" me, and what a great feeling it is to have that. I identified with the story that pondered "how does one go about making small talk?" maybe a little more than I'd like. Many of the characters in Summer Blonde seem to be looking for someone to fulfill them, but don't seem to know where to begin. I loved the ambiguity inherent in many of the stories. For example, in "Hawaiian Getaway," Hillary Chan has a remarkably hard time with people- she seems to crave them and hate them at the same time. Toward the end, she meets a man who she seems to click with, but it's left up in the air whether he was a "castle in the air" using her for sex or if he's just running late to meet her. Many of the stories have a hesitant touch of almost-hope at the end.

From the book jacket, I learned that the merit of Tomine's work has been hotly debated. From what I can gather, many of his characters tend to be hipster emo types who bewail lack of meaningful connection with others in their lives. I thought their connections were deeper than that though. I thought Dan Raeburn, who wrote the introduction on the book jacket, summed it up well when discussing the similarity between many of the characters- they are all seeking human connection in an increasingly alienating world. These stories were much more about creating emotion than sparking intellectual thought for me. And I need to create a new word to describe what these stories made me feel. Aching-sympathetic-identification with a touch of thankfulness? That's not quite it, but I think maybe the best I'm going to be able to do.… (more)
10 more
LibraryThing member BenjaminHahn
Much like Short Comings in style and general story arc but split up into four vignettes. The flap on the jacket is accurate. Mr. Tomine does have a knack for drawing all sorts of facial expressions, but particularly annoyed ones. These stories did remind me of certian people I have known in my life. People that I haven't thought about in a long time. Very subtle characterizations that I have never been able to put my finger on came to life again in some of these stories.

I enjoyed story "Bomb Scare", regarding the young man who is picked on in school and mocked for exclusively haning out with just one other boy. I drew many similiarities to my own personal 6th grade expereince. The young man's willingness to sell out his friend in hopes of just a chance at increasing his stature with a more popular girl. Hit it right on the mark for me. Reading it today in 2009 in the midst of the second Iraq war, I also found an odd convergence in the way the first gulf war is portrayed. It took the C and C music factory cassette to make me realize we were back in 1991, not 2003.

Overall, a fine group of stories with impressive artwork that brings out the subtle machinations of the character's psychology.… (more)
LibraryThing member takah
Adrian Tomine's trade paperback Summer Blonde collects issues five through eight of his comic book Optic Nerve, including some of his best stories. Highlights include the titular story and "Bomb Scare," which could easily be one of the most painfully accurate depictions of being a teen there ever was.
LibraryThing member oh_terrorista
beautiful art, beautiful stories- he's a genius!
LibraryThing member N.Nebeluk
This book is the reason I am happy that the graphic novel genre exists. It's good to see people breaking away from superheroes and into actualy storytelling with real people. The people in the book may be flat, but they're not boring. They're the typical freaks and geeks we meet in high school and adulthood, they all have their issues and they try to deal with them as best they can. Sometimes it works, sometimes it doesn't. What's important is that we can relate to these characters. They're not some complex superbeings full of emotional riddles, they're the weird kid you saw sitting next to you in homeroom or the creepy old guy on the bus. We can relate to them, even if we may not want to. The worlds they live in are compelling and each stories ending was perfect. They gave a sense of closure to the story, but not finality. The characters will exists, will thrive, and maybe finally be happy. I'm not sure if the graphic novel format was necesarry but it sure didn't hurt. The book is a compelling work of fiction that serves to remind us that everyone is just a little bit messed up.… (more)
LibraryThing member JimmyChanga
Summer blonde, some are not blonde, and some just fantasize about blondes. There's too much teen angst and white-boy self pity in these pages for me to really be very enthusiastic about it. All four protagonists are losers who are just creepy or bitter enough for you to not feel sorry for him/her. The first two stories suffered from this the most, I felt like the artist was writing about himself. The last two stories are an improvement. I liked the 3rd story the most, because it was about an asian girl and not a white boy. Graphically, this stuff doesn't really do anything for me. It's pretty standard hipster graphic novel art, I didn't feel at any point like he really stretched himself visually to express something that couldn't have been expressed as well if not better with words. On the positive side, Tomine is good at the narrative ellipse. Overall I'd give it 2 stars, maybe 2.5 stars.… (more)
LibraryThing member jakegest
I really enjoyed my first taste of Tomine's work in this small selection of shorts. I had mentioned earlier, they read like vignettes, small splashes of mostly character. I feel like flawed characters in fiction often have their imperfections glorified, and although I am not entirely against this approach, I enjoy how Adrian's humans are displayed as they are, and the reader is left to judge. I also enjoy his lack of of endings, or finality, it somehow makes everything seem all the more lifelike.… (more)
LibraryThing member greeniezona
I ran into this one at the used book store, and although I didn't really have the money to buy it, finding good graphic novels is so rare there now that they've made them easier to find that I had to snatch it up immediately. This hardback contains issues #5-8 of the comic Optic Nerve. Each issue is a different story, three of them of outsiders trying to make some sort of connection with other people, and one the story of an Asian-American couple struggling with their different levels of political consciousness/activism. Each story also has a vaguely unsatisfying ending -- rather than the typical American Hollywood type ending, these stories end more like foreign arthouse films -- very ambiguously. If that sort of thing doesn't bother you, you will probably like these stories. But judging by the letters section in issue #9 of Optic Nerve, some people are really bothered...… (more)
LibraryThing member inkyphalangies
I enjoyed this more than I excpected, but boy was I bummed by the time I finished it.
LibraryThing member obtusata
This is an intriguing collection of stories. In each story, the main character is lonely, disconnected and a bit pathetic. But, their decent to their pathetic existence (or, ascent out of it) quietly sneaks up on them. It seems very real - melancholy, but real.

I found the way the stories ended to be very intriguing. They seemed to cut off just before the expected sad/happy ending. But, I enjoyed that. That's what life really is - a cycle of stories that don't always have a storybook ending.… (more)
LibraryThing member KWharton
I felt a bit icky about this one
Fewer