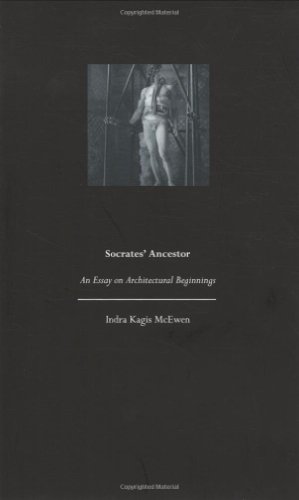 Socrates' Ancestor is a rich and poetic exploration of architectural beginnings and the dawn of Western philosophy in preclassical Greece. Architecture precedes philosophy, McEwen argues, and it was here, in the archaic Greek polis, that Western architecture became the cradle of Western thought. McEwen's appreciation of the early Greek understanding of the indissolubility of craft and community yields new insight into such issues as orthogonal planning and the appearance of the encompassing colonnade - the ptera or "wings" - that made Greek temples Greek. Who was Socrates' ancestor? Socrates claims it was Daedalus, the mythical first architect. Socrates' ancestors were also the first Western philosophers: the preSocratic thinkers of archaic Greece where the Greek city-state with its monumental temples first came to light. McEwen brilliantly draws out the connections between Daedalus and the earliest Greek thinkers, between architecture and the advent of speculative thought. She argues that Greek thought and Greek architecture share a common ground in the amazing fabrications of the legendary Daedalus: statues so animated with divine life that they had to be bound in chains, the Labyrinth where Theseus slew the Minotaur, Ariadne's dancing floor in Knossos. Socrates' Ancestor is an exploration as remarkable for its clarity as for its avoidance of reductionism. Drawing as much on the power of myth and metaphor as on philosophical, philological, and historical considerations, McEwen first reaches backward: from Socrates to the earliest written record of Western philosophy in the Anaximander B1 fragment, and its physical expression in Anaximander's built work - a "cosmic model" that consisted of a celestial sphere, a map of the world, and the first Greek sun clock. From daedalean artifacts she draws out the centrality of early Greek craftsmanship and its role in the making of the Greek city-state. The investigation then moves James forward to a discussion of the polis and the first great peripteral temples that anchored for the meaning of "city."… (more)

On Weathering: The Life of Buildings in Time by Mohsen Mostafavi