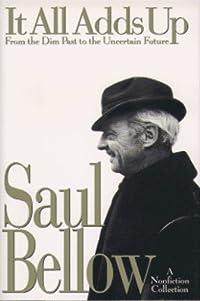 It All Adds Up: From the Dim Past to the Uncertain Future: A Nonfiction Collection

"Saul Bellow's fiction, honored by a Nobel Prize and a Pulitzer, among other awards, has made him a literary giant. Now, in his first nonfiction collection, Bellow's learned and original mind shines through over four decades of reflections on literature, on the state of the artist in the "violent uproar" of contemporary life, and on life itself, "the mysteries of our common human nature."" "Beginning with "Mozart: An Overture," a personal bicentennial tribute to the composer who means so much to Bellow, these carefully selected pieces, illuminated by Bellow's absolute clarity of language, range from his Nobel Prize lecture of 1976 to ruminations about his beloved city of Chicago, a city, Bellow writes, that "builds itself up, knocks itself down again, scrapes away the rubble, and starts over"; to remembrances of passing friends - John Cheever, Allan Bloom, Isaac Rosenfeld, John Berryman; to the state of the novel in our time. Along the way, he invokes Tolstoy, Dostoyevsky, Flaubert, Proust, Conrad, and other masters of the novel to bear the testament of his own life, his conviction of what the novel as a work of art can do for a society benumbed by technology." "Also included in this rich collection are pastoral, provocative travel pieces on Spain, Israel, Paris, Tuscany, and other special haunts. And finally, as the chef d'oeuvre, the revealing question-and-answer piece comprising "A Half Life," and "A Second Half Life," which is as close as we will come to an autobiography from this contemporary master of American fiction."--Jacket.… (more)

LibraryThing member edwinbcn
By the mid-90s you were a real anachronism to even suggest interest in Marxism, let alone say that you were a Marxist. Nonetheless, that's more or less exactly what Bellow does.

In a succinct introduction of just over two pages he declares that he thinks this collection of non-fiction is superfluous, but he gives in to the wish of the publisher. He also sums up where, retrospectively and summatively, his main interest lies, namely with attention and distraction.

The essays are difficult to read because the author obviously doesn't service the reader more than necessary. To get all references to, for instance people who influenced Bellow, you would have to look those people up in external sources.

Bellow states that Marxism was the main formative influence during his life, and he cannot simply abandon it. However, he does conclude that Marxism has lost the power to explain reality because wordwide society is now dominated by urbanization and technology. These essays were written in the early 90s, obviously these trends come later to China, but may likewise undermine the power of Marxist theory to predict and guide societal development.

Bellow has a lot more to say, and his tenets about misinformation and disinformation are very apt. In fact, his essays can only be understand through very attentive and repeated reading.

The essays I like most are the essays in Part 3, and the two interviews with Saul Bellow at the end of the book. Clearly, Bellow is a bit of a maverick, but very clever. Incidentally, he was awarded the Nobel Prize for Literature in 1976.… (more)