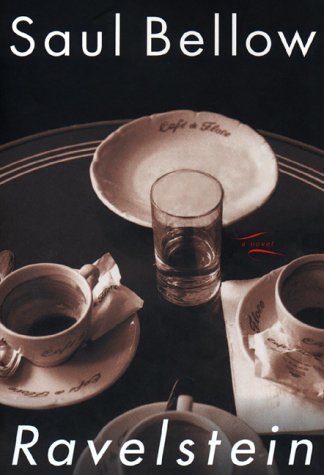 Abe Ravelstein is a brilliant professor at a prominent midwestern university and a man who glories in training the movers and shakers of the political world. He has lived grandly and ferociously-and much beyond his means. His close friend Chick has suggested that he put forth a book of his convictions about the ideas which sustain humankind, or kill it, and much to Ravelstein's own surprise, he does and becomes a millionaire. Ravelstein suggests in turn that Chick write a memoir or a life of him, and during the course of a celebratory trip to Paris the two share thoughts on mortality, philosophy and history, loves and friends, old and new, and vaudeville routines from the remote past. The mood turns more somber once they have returned to the Midwest and Ravelstein succumbs to AIDS and Chick himself nearly dies. Deeply insightful and always moving, Saul Bellow's new novel is a journey through love and memory. It is brave, dark, and bleakly funny: an elegy to friendship and to lives well (or badly) lived.… (more)

Reviews by Frederick Glaysher The Human Condition…
American English departments have proven themselves unworthy stewards of what is noble in human nature, in the great public.

LibraryThing member RandyMetcalfe
I’m not entirely convinced that the roman à clef is a worthy vehicle for a great writer. And there is little doubt that Saul Bellow is a great writer. Nor is there much doubt that numerous characters in his novels have been modelled directly on people he knew intimately, friend and foe. However, only a few of his novels so explicitly take up this correspondence with the non-fictional that they typically get labelled in this manner. Ravelstein, Bellow’s last novel, is one of these. In it, he sketches the larger-than-life character of a professor by the name of Ravelstein, who is a thinly disguised stand-in for Bellow’s friend, Allan Bloom. These are Ravelstein’s last days. He is HIV-positive, subject to numerous rare and unrelenting infections, but determined to see his way out of the world in much the way that he lived in it: unapologetic, highly opinionated, self-centred (in every sense), and fiercely devoted to his close friends. It took Bellow some eight years after the death of Bloom to pen this fictionalized memoir. In the interim he himself came perilously close to death. And so the book as a whole became as much a meditation on death as it is a depiction of one particular death.

At least part of the novel holds up well. In particular, the first section, which was published as a standalone in The New Yorker, is tightly written and full of the flamboyance that ever after gets associated with Ravelstein (and now Bloom). Thereafter the novel begins to unravel. Arguments and anecdotes re-emerge almost without change from their first mention. It begins to seem like Bellow is circling his subject but can’t quite lock it down. He meanders. He is subject to only periodic lucidity. He falters under the weight of the burden that his friend has laid upon him in requesting that he take up this biographical task. Maybe it’s all a brilliant representation of decline. Or, less charitably, it might simply be a less than fully edited effort. At some point, at any rate, I began to lose interest both in the subject, i.e. death, and in the subject, i.e. Ravelstein.

Any writer who lasts as long as Bellow will produce works of varying quality. Fortunately there are many other titles in his oeuvre that will capture, challenge, and delight the reader even if this is not one of them.… (more)
3 more
LibraryThing member yooperprof
Allan Bloom (who is the thinly veiled subject of this roman-a-clef) must have one piece of work, so to speak!
LibraryThing member AlanWPowers
I've read all of Bellow, the best American novelist during my lifetime, though Updike became, in his last books, a close second--and a better reviewer.
I do not say this simply because Bellow's best friend at the U MN was my Ph.D. advisor Leonard Unger: a charming photo of them on a sofa smoking and laughing, with their wives framing it, was printed in Rolling Stone in the 50s. (In the pic I think Leonard was just cracking one of his myriad jokes, probably a Jewish joke, according to his wife Sherley who was there.) Bellow and Unger together composed, over lunch at the UMN Faculty Club,
a translation of the first four lines of the Wasteland by TS Eliot (Leonard's early specialty)--into Yiddish.
Ravelstein's a remarkable book partly bec Bellow wrote it in age, and partly bec it's nearly impossible to focus a gripping novel on the life of an academic, here Bloom. My line on the book: It would have been a much better, wittier book had Bellow written it about another of his friends, Leonard Unger.… (more)
LibraryThing member Czrbr
Book Description: New York, NY, U.S.A.: Viking Penguin, 2000. Hard Cover. Fine/Fine. First Edition. 233 pages ; 25 cm. As new, clean crisp unread copy with bright jacket showing minimal signs of shelf wear in Mylar jacket protector.
Fewer