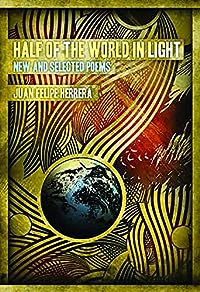 Half of the World in Light: New and Selected Poems

"For nearly four decades, Juan Felipe Herrera has documented his experience as a Chicano in the United States and Latin America through stunning, memorable poetry that is both personal and universal in its impact, themes, and approach. Often political, never fainthearted, his career has been marked by tremendous virtuosity and a unique sensibility for uncovering the unknown and the unexpected. Through a variety of stages and transformations, Herrera has evolved more than almost any other Chicano poet, always re-inventing himself into a more mature and seasoned voice. Now, in this unprecedented collection, we encounter the trajectory of this highly innovative and original writer, bringing the full scope of his singular vision into view. Beginning with early material from A Certain Man and moving through thirteen of his collections into new, previously unpublished work, this assemblage also includes an audio CD of the author reading twenty-four selected poems aloud. Serious scholars and readers alike will now have available to them a representative set of glimpses into his production as well as his origins and personal development. The ultimate value of bringing together such a collection, however, is that it will allow us to better understand and appreciate the complexity of what this major American poet is all about."-- Publisher's description.… (more)

Sleeping it Off in Rapid City: poems, new and selected by August Kleinzahler
The Republic of Poetry: Poems by Martín Espada
Lighthead by Terrance Hayes
Martin & Meditations on the South Valley by Jimmy Santiago Baca
Time and Materials: Poems 1997-2005 by Robert Hass
8 more
Vita Nova by Louise Gluck
The end of the west by Michael Dickman
Woman Hollering Creek: And Other Stories by Sandra Cisneros
The Shadow of Sirius by W. S. Merwin
Strong is your hold by Galway Kinnell
Dreaming the end of war by Benjamin Alire S©Łenz
Vice: New and Selected Poems by Ai
Space, in chains by Laura Kasischke
Fewer