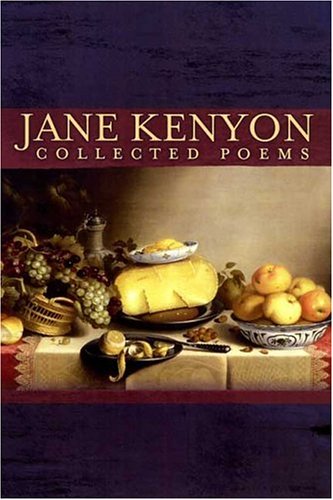 "Jane Kenyon is considered one of America's best contemporary poets. Her previous collection, Otherwise: New & Selected Poems, published just after her death in 1995, has been a favorite among readers and is already a contemporary classic." "Now at the ten-year anniversary of her death, Kenyon's Collected Poems assembles all of her published poetry in one book. Included here are the complete poems found in her four previous volumes-From Room to Room, The Boat of Quiet Hours, Let Evening Come, and Constance-as well as the poems that appear in her posthumous volumes Otherwise and A Hundred White Daffodils, four poems never before published in book form, and her translations in Twenty Poems of Anna Akhmatova. Book jacket."--BOOK JACKET.

LibraryThing member abirdman
A beautiful volume, and a valued collection. It's grace itself to have all of her work in one, sadly slim, volume. Nice presentation and design. All the Jane Kenyon you'll ever need... or get!

This book is beautifully designed and bound. Unlike most "collected works" this edition gives adequate space to the poems where, as in their original editions, each poem gets its own page(s), and the shape and separation between the individual volumes is maintained. Lovely.… (more)
4 more
LibraryThing member VioletBramble
This collection contains all of Kenyon's previously published poems, some unpublished poems and her translations of the poetry of Russian poet Anna Akhmatova. Kenyon's poems are straightforward and beautiful. Most of her poems are about rural living, marriage, illness, death and depression. Kenyon suffered from depression her entire life. Here is part of a multiple part poem about depression:

Having it Out with Melancholy
1. From the Nursery

When I was born, you waited
behind a pile of linen in the nursery,
and when we were alone,you lay down
on top of me, pressing
the bile of desolation into every pore.

And from that day on
everything under the sun and moon
made me sad - even the yellow
wooden beads that slid and spun
along a spindle on my crib.

You taught me to exist without gratitude.
You ruined my manners toward God:
"We're here simply to wait for death;
the pleasures of earth are overrated."

I only appeared to belong to my mother,
to live among blocks and cotton undershirts
with snaps; among red tin lunch boxes
and report cards in ugly brown slipcases.
I was already yours - the anti-urge,
the mutilator of souls.… (more)
LibraryThing member unclebob53703
Guess I bought this because I'd read so much about her in Donald Hall's books. So glad I did, the poems are lovely, warm and accessible in a way I find most poems aren't. Read it cover to cover, which I rarely to with "Collected" works.
LibraryThing member jack2410
I enjoy reading her poems.
LibraryThing member jphamilton
I should mention that I first came to know of Jane Kenyon many years ago, as the poet-wife of a favorite New England poet and essayist. Over those years, I’ve read and purchased her poetry here and there. But it was while corresponding with an old friend a few months ago, that Ms. Kenyon came to mind again. I was writing about how her late husband, Donald Hall, would still cry when speaking of her even twenty years after her death. At the time of the correspondence, I was again rereading Hall’s poetry and his memoir about losing Jane, but my friend chose to read some Kenyon. For myself, reading more Kenyon came about when I saw this large collection of her poetry was available in paperback.

Large volumes of the collected poetry of a particular poet have become a special treat and addiction for me. You’re sure to find the familiar, the better-known poems, but also the B-sides, so to speak. I still prefer to experience a musician’s latest work via an album, with everything available in the order the artist has chosen. Sitting down with a thick book of poetry allows you to see all their work and get a good feel for them. You will see how their work evolved as their life continued.

Being originally from New England, the setting of many of these poems seems to me extremely familiar and comfortable. I think I still have a feel for the pace of life there. Kenyon loved to write short poems that often came across as meditations on the familiar things, situations, and feelings that are common with many of us.

I came across this quote from Wendell Berry in the New York Times about how Kenyon didn’t allow Hall’s fame and style to stop her from becoming the poet she wanted to be, as "a poet who had set up shop smack in the middle of another poet's subject." Donald Hall was more famous and showier than Jane, and often took up much more of the oxygen in the room. He went on to write about losing her in both memoir (The Best Day the Worst Day), and poetry (Without), after she died of leukemia in early 1995, at the age of 47. Her own poetry rarely touched on her leukemia, but her long experience with depression often made an appearance in her words.

I came away from this book with so much more of an appreciation for her work. As often happens, sitting down with a favored writer and a drink is an adventure through another door. It’s a shame that more of us couldn’t then sit down with the actual writer, drink or not. Having hosted so many writers over the years in our different bookstores, I feel very spoiled in this regard. A few were disappointments, but by far most of them are just like you hoped they would be. Oh, artists.… (more)
Fewer