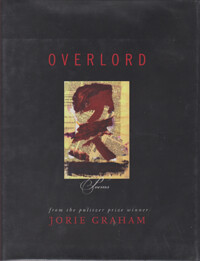 What does it mean to be fully present in a human life? How -- in the face of the carnage of war, the no longer merely threatened destruction of the natural world, the faceless threat of spiritual oversimplification and reactive fear -- does one retain one's capacity to be both present and responsive? And to what extent does our capacity to be present, to be fully ourselves, depend on our relationship to an other and our understanding of and engagement with otherness itself? With what forces does the sheer act of apprehending make us complicit? What powers lord over us and what do we, as a species, and as souls, lord over? These are among the questions Jorie Graham, in her most personal and urgent collection to date, undertakes to explore, often from a vantage point geographically, as well as historically, other. Many of the poems take place along the coastline known as Omaha Beach in Normandy, and move between visions of that beach during the Allied invasion of Europe (whose code name was Operation Overlord) and that landscape of beaches, fields, and hedgerows as it is known to the speaker today. In every sense the work meditates on our new world, ghosted by, and threatened by, competing descriptions of the past, the future, and what it means to be, as individuals, and as a people, "free."… (more)

LibraryThing member lavaturtle
I really really like some of the poems in here. Others couldn't hold my interest at all.
1 more
LibraryThing member b.masonjudy
Graham's collection didn't intimidate me the same way as her other work. Perhaps it was the focus on ontology and unraveling of faith, self, and the questions of desperate doubt in the most quiet moments. There's still the precision and verbosity I'd expect from her work but it is more focused,
Show More
inward and the empty spaces of unknowing, rather than spiraling outward.
Show Less
Fewer