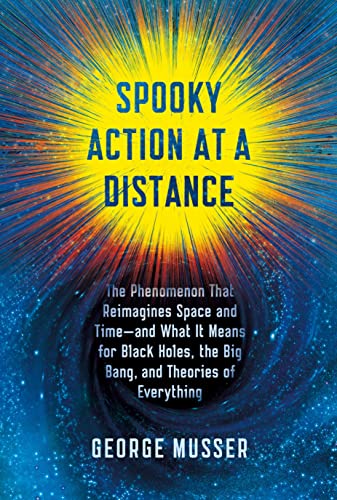 Spooky Action at a Distance: The Phenomenon that Reimagines Space and Time : and what it means for black holes, the big bang, and theories of everything

What is space? It isn't a question that most of us normally ask. Space is the venue of physics; it's where things exist, where they move and take shape. Yet over the past few decades, physicists have discovered a phenomenon that operates outside the confines of space and time: nonlocality--the ability of two particles to act in harmony no matter how far apart they may be. It appears to be almost magical. Einstein grappled with this oddity and couldn't come to terms with it, describing it as "spooky action at a distance." More recently, the mystery has deepened as other forms of nonlocality have been uncovered. This strange occurrence, which has direct connections to black holes, particle collisions, and even the workings of gravity, holds the potential to undermine our most basic understandings of physical reality. If space isn't what we thought it was, then what is it? Here, science journalist George Musser sets out to answer that question, offering a provocative exploration of nonlocality and a celebration of the scientists who are trying to explain it. Musser guides us on a journey into the lives of experimental physicists observing particles acting in tandem, astronomers finding galaxies that look statistically identical, and cosmologists hoping to unravel the paradoxes surrounding the Big Bang. He traces the often contentious debates over nonlocality through major discoveries and disruptions of the twentieth century and shows how scientists faced with the same undisputed experimental evidence develop wildly different explanations for that evidence. Their conclusions challenge our understanding of not only space and time but also the origins of the universe--and they suggest a new grand unified theory of physics.--Adapted from book jacket.… (more)

LibraryThing member jefware
Spacetime: an emergent property of a deeper quantum reality.
4 more
LibraryThing member fpagan
Nonlocality in advanced physical theory, and not just the kind associated with quantum entanglement (where Musser laments the continuing confusion over just what is the implication of quantum mechanics proved by Bell's Theorem -- (1) that locality is false or (2) that either locality or realism, or both, is false). The novelty of the concepts often makes for slow reading even though the writing is popular-level. Readers are hit with a plethora of startling statements such as "The ordinary space we inhabit could be a superposition of nonspatial networks, the nonspatiality of one negating the nonspatiality of another" (p 186). A book not to be missed.… (more)
LibraryThing member jjwilson61
Spooky Action at a Distance was an enlightening exploration into the history of non-locality in physics although there are several aspects to it and in many places in the text I was unsure exactly how the phenomenon being explained qualified as non-local. The premise of the book is that space, and likely time as well, are emergent properties of whatever is going on in a level below quantum mechanics and general relativity, but it couldn't in the end come up with more than a quick sketch of what a physics without space or time would look like. Still, I'm glad I read the book to see where the current frontier of physics is at.… (more)
LibraryThing member Wattsian
Good read, but round and round through the same issues and topics, and at some point I just lost the thread. 9/10 of the book read.
LibraryThing member DLMorrese
What is the fundamental nature of reality? Philosophers have been debating this question for well over two thousand years. They still are. In Spooky Action at a Distance, George Musser draws a direct line between the speculations of early Greek philosophers and those of modern thinkers. They're tackling the same kinds of fundamental questions: What is essentially real? What is emergent? What is perception? Take them out of their lab coats and put them in togas, and the advocates of loop quantum gravity, string theory (in its various forms), quantum graphity (sic), the S-matrix, and others, bear a striking resemblance to a bunch of debating Epicureans, Stoics, Skeptics, and Pythagoreans.

The title, Spooky Action at a Distance, refers to a strange property that seems to allow one subatomic particle to be instantly affected by another subatomic particle with which it has been 'entangled', no matter how far apart they may be. Imagine two billiard balls. After a brief meeting, you roll them away from one another. When they reach opposite ends of the pool table, you spin one clockwise. The other immediately spins to match. It's as if they're linked, as if the the space between them doesn't really exist. So, maybe it doesn't; not the way we normally think of it, anyway. Of course this doesn't really apply to big things like billiard balls because the strange effects seem to cancel out at large scales, but the effect is real, and it leads to questions about the nature of time, matter, and pretty much everything else.

We call investigators of reality 'physicists' now rather than 'philosophers'. The biggest difference seems to be whether or not they use esoteric equations to help them out. In that sense, this book is probably more philosophy than science, which is not a bad thing. It's implied that a lot of complicated math lies behind modern ideas, but Musser kindly refrains from exposing us to it.

But a brilliant mind is still a brilliant mind by any name, and they are looking for answers. What they all seem to agree on is that space and time, and pretty much everything we think of as 'reality', can't be quite what they appear to be. Not fundamentally, anyway. There's a deeper reality behind our familiar apparent reality. They're just not sure what it is, and from how it sounds, that's not likely to change anytime soon. The questions aren't easy. The answers aren't obvious, but the current speculations are fascinating, mind-bending. It may take another two thousand years before we (or maybe our robotic successors?) finally figure it all out. Maybe we never will, but it's important to try. There's no chance at all of finding answers if we don't ask questions.

Now: The Physics of Time by Richard A. Muller
The Fabric of the Cosmos : Space, Time, and the Texture of Reality by Brian Greene
From Eternity to Here: The Quest for the Ultimate Theory of Time by Sean M. Carroll
The Hidden Reality: Parallel Universes and the Deep Laws of the Cosmos by Brian Greene
Einstein's Cosmos: How Albert Einstein's Vision Transformed our Understanding of Space and Time by Michio Kaku
3 more
The grand design by S. W. Hawking
Seven Brief Lessons on Physics by Carlo Rovelli
The Infinity Puzzle: Quantum Field Theory and the Hunt for an Orderly Universe by F. E. Close
Fewer