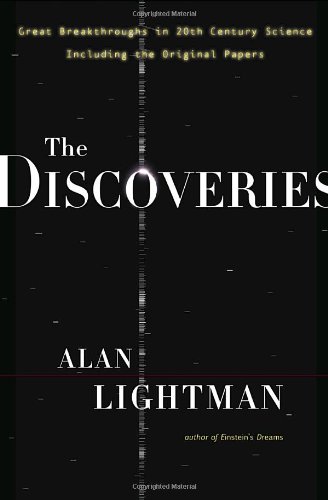 An unprecedented explosion of creativity, insight, and breakthrough occurred in every field of science in the last century. These discoveries profoundly changed the way we understand the world and our place in it. Now physicist and novelist Lightman tells the stories of two dozen of the most seminal discoveries. He paints the intellectual and emotional landscape of each discovery, portrays the personalities and human drama of the scientists involved, and explains the significance and impact of the work. He explores such questions as whether there were common patterns of research, whether the discoveries were accidental or intentional, and whether the scientists were aware of or oblivious to the significance of what they had found. Finally, Lightman gives a guided tour through each of the original papers, which are included in the book.--From publisher description.… (more)

LibraryThing member carterchristian1
A must read. How our knowledge of the world has changed in the lifetime of many of us and related first papers.

The Fabric of the Cosmos : Space, Time, and the Texture of Reality by Brian Greene
Coming of age in the Milky Way by Timothy Ferris
Six easy pieces: essentials of physics, explained by its most brilliant teacher by Richard Philipp Feynman
The grand design by S. W. Hawking
Quantum Man: Richard Feynman's Life in Science by Lawrence Maxwell Krauss
5 more
E=mc2 : a biography of the world's most famous equation by David Bodanis
The Quark and the Jaguar: Adventures in the Simple and the Complex by Murray Gell-Mann
The Universe in a Nutshell by S. W. Hawking
Genius : the life and science of Richard Feynman by James Gleick
The Inflationary Universe: The Quest For A New Theory Of Cosmic Origins by Alan H. Guth
Fewer