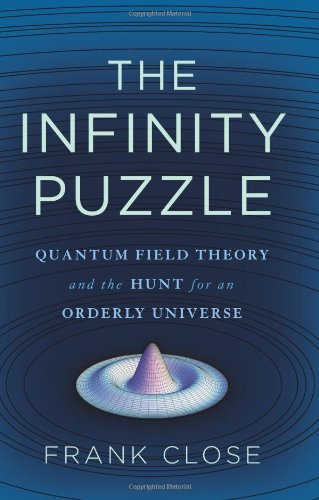 The Infinity Puzzle: Quantum Field Theory and the Hunt for an Orderly Universe

"Speculation is rife that by 2012 the elusive Higgs boson will be found at the Large Hadron Collider. If found, the Higgs boson would help explain why everything has mass. But there's more at stake-what we're really testing is our capacity to make the universe reasonable. Our best understanding of physics is predicated on something known as quantum field theory. Unfortunately, in its raw form, it doesn't make sense-its outputs are physically impossible infinite percentages when they should be something simpler, like the number 1. The kind of physics that the Higgs boson represents seeks to "renormalize" field theory, forcing equations to provide answers that match what we see in the real world. The Infinity Puzzle is the story of a wild idea on the road to acceptance. Only Close can tell it"--Provided by publisher. Many mysteries of the atom have came unraveled, but one remains intractable- what Frank Close calls the "Infinity puzzle'. The problem was simple to describe. Although clearly very powerful, quantum field theory was making one utterly ridiculous prediction: that certain events had an infinite probability of occurring. The Infinity Puzzle charts the birth and life of the idea, and the scientists, who realized it. Based on numerous firsthand interviews and extensive research, this book captures an era of great mystery and greater discovery. Even if the Higgs boson is never found, renormalization- the pursuit of an orderly universe- has led to one of the richest and most productive intellectual periods in human history.--[book jacket]… (more)

LibraryThing member fpagan
The main title alludes to renormalization, the mathematical trick used to eliminate calculational divergences in quantum electrodynamics, the theory of electroweak unification (Higgs mechanism, massive bosons), etc. The book is a long and detailed, popular-level, personality-oriented history, complete with false starts and dead ends, including quite a few of the lesser-known (to me at least) contributing physicists. Its heart is the electroweak story but, with the development of quantum chromodynamics (strong-force theory -- quarks and gluons) also being traced, it ends up having covered the whole Standard Model. Not a quick read, but a very good one.… (more)
1 more
LibraryThing member BakuDreamer
This is good ( where else will you find " Recall that structure occurs because fermions are like cuckoos, whereas bosons are like penguins. " ) But I couldn't real all of it as I had to give it back , and the library here is screwed now ~
Fewer

The 4 Percent Universe: Dark Matter, Dark Energy, and the Race to Discover the Rest of Reality by Richard Panek
Quantum Man: Richard Feynman's Life in Science by Lawrence Maxwell Krauss
The Hidden Reality: Parallel Universes and the Deep Laws of the Cosmos by Brian Greene
Quantum: Einstein, Bohr, and the Great Debate about the Nature of Reality by Manjit Kumar
Einstein's Telescope: The Hunt for Dark Matter and Dark Energy in the Universe by Evalyn Gates