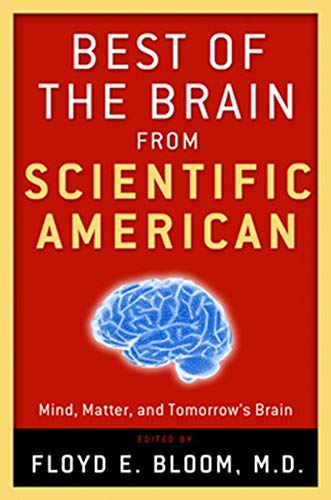 Best of the Brain from Scientific American: Mind, Matter, and Tomorrow's Brain

We hear about a woman with an artificial arm controlled by her mind, read stories about the creative potential of "right-brain" and "left-brain" people, and watch science fiction films featuring characters with implanted mind chips. Yet few of us understand the science behind these and other visionary advances being made today in brain research. Leading neuroscientists and scholars have charted the stream of new findings in Scientific American and Scientific American Mind, and their articles from the past eight years, compiled here in a comprehensive volume, offer diverse and provocative perspectives on various cutting-edge brain science projects.  Scientific American, the oldest continuously published magazine in the United States, has long been the standard bearer of science journalism, and the brain science articles published in its pages offer unparalleled insights into the world of neuroscience. The expert articles assembled here, divided into three sections, reveal the latest developments of brain research in a compelling and wholly readable fashion and explore the range of fields and topics now included under the umbrella of neuroscience. Consciousness and creativity are the focus of the "Mind" section, which features such compelling essays as science writer Carl Zimmer's examination of how the brain creates a sense of self. Steven E. Hyman, Harvard Provost and former director of the National Institute of Mental Health, proposes new ways of diagnosing psychiatric disorders in "Matter," a section that also features articles on psychological disorders, addictions, and other topics related to the interaction between body and brain. And "Tomorrow's Brain" reveals the intriguing future potential of man-machine interactions, as well as pioneering new methods of brain treatment. Eminent neuroscientist Floyd E. Bloom also contributes an engaging introduction that situates these pieces on the front lines of brain research. In today's technologically driven world, our lives are changing faster than ever, and neuroscience is becoming an integral part of that transformation. Best of the Brain from Scientific American gathers the very best writings on this sea change, providing an invaluable guide to the exhilarating possibilities of neuroscience.… (more)

In Search of Memory: The Emergence of a New Science of Mind by Eric R. Kandel
A user's guide to the brain : perception, attention, and the four theaters of the brain by John J. Ratey
The brain that changes itself : stories of personal triumph from the frontiers of brain science by Norman Doidge
Kluge : the haphazard construction of the human mind by Gary F. Marcus
The Feeling of What Happens: Body and Emotion in the Making of Consciousness by Antonio R. Damasio