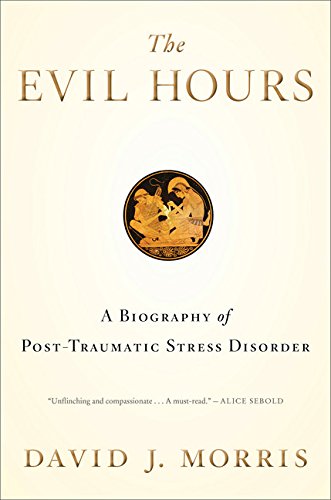 The evil hours : a biography of posttraumatic stress disorder

"In the tradition of The Emperor of All Maladies and The Noonday Demon, a moving, eye-opening exploration of PTSD. Just as polio loomed over the 1950s, and AIDS stalked the 1980s and '90s, posttraumatic stress disorder haunts us in the early years of the twenty-first century. Over a decade into the United States' "global war on terror," PTSD afflicts as many as 30 percent of the conflict's veterans. But the disorder's reach extends far beyond the armed forces. In total, some twenty-seven million Americans are believed to be PTSD survivors. Yet to many of us, the disorder remains shrouded in mystery, secrecy, and shame.Now, David J. Morris -- a war correspondent, former Marine, and PTSD sufferer himself -- has written the essential account of this illness. Through interviews with individuals living with PTSD, forays into the scientific, literary, and cultural history of the illness, and memoir, Morris crafts a moving work that will speak not only to those with the condition and to their loved ones, but also to all of us struggling to make sense of an anxious and uncertain time"--… (more)

New York Times
“The Evil Hours” is a provocative, exhaustively researched and deeply moving analysis of traumatic memory and how we make sense of it. This book will teach you that a failure to understand this disorder is a failure “to acknowledge that trauma is part of the human condition,” and that to turn away from its history is to make yourself complicit in a plague of American disengagement. “No other people in history is as disconnected from the brutality of war,” Morris writes, “as the United States today.”

LibraryThing member The_Hibernator
In this important work, Morris traces the history of what we now call post-traumatic stress disorder (PTSD), even back into the ancient days. He begins the book with his own experiences with PTSD. He then talks about how PTSD affects the lives of its sufferers. He also discusses the major treatments for PTSD, many of which he has tried out himself. He apparently interviewed quite a few people for the book - at least he claims he did - though those interviews are generally chiseled down into two or three sentence mentions.

One thing that disappointed me is that this is not a book about PTSD in general - it is a book about PTSD in military. PTSD is suffered more by women than by men. Most Americans with PTSD are women who have been raped or beaten or otherwise traumatized during a non-war setting. One review I read said "rape is also discussed extensively." It wasn't. Rape got a side comment every once in a while - generally in the form of a quote from Alice Sebold's memoir. However, most of the research on PTSD, and Morris' own personal experience with PTSD, is military-related, therefore it is understandable that he would focus on military PTSD. Plus, if you actually read the jacket carefully (which I did not), it's pretty clear that this is a book mostly about military PTSD.

The book also tended to wander and get a bit dull at times, but its important content made up for this minor annoyance. In the end, I thought this was a good book that could have been an amazing book if he had taken that extra step to include womens' experiences a little more.

The narrator was great - no complaints there.… (more)

Excellent daughters : the secret lives of young women who are transforming the Arab world by Katherine Zoepf
Ghettoside : a true story of murder in America by Jill Leovy
Blood at the root : a racial cleansing in America by Patrick Phillips