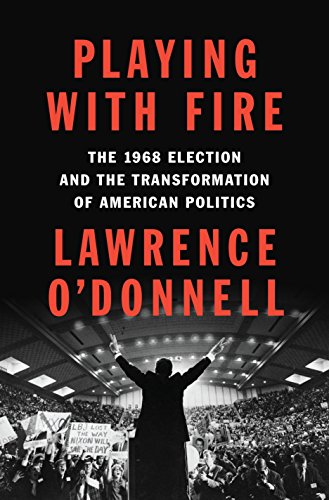 Playing with Fire: The 1968 Election and the Transformation of American Politics

The celebrated host of MSNBC's The Last Word with Lawrence O'Donnell presents an account of the 1968 presidential election to evaluate its lasting influence on American politics and the Democratic party, exploring the pivotal roles of RFK and McCarthy, two high-profile assassinations and the Chicago riots. "The 1968 U.S. Presidential election was the young Lawrence O'Donnell's political awakening, and in the decades since it has remained one of his abiding fascinations. For years he has deployed one of America's shrewdest political minds to understanding its dynamics, not just because it is fascinating in itself, but because in it is contained the essence of what makes America different, and how we got to where we are now. Playing With Fire represents O'Donnell's master class in American electioneering, embedded in the epic human drama of a system, and a country, coming apart at the seams in real time. Nothing went according to the script. LBJ was confident he'd dispatch Nixon, the GOP frontrunner; Johnson's greatest fear and real nemesis was RFK. But Kennedy and his team, despite their loathing of the president, weren't prepared to challenge their own party's incumbent. Then, out of nowhere, Eugene McCarthy shocked everyone with his disloyalty and threw his hat in the ring to run against the president and the Vietnam War. A revolution seemed to be taking place, and LBJ, humiliated and bitter, began to look mortal. Then RFK leapt in, LBJ dropped out, and all hell broke loose. Two assassinations and a week of bloody riots in Chicago around the Democratic Convention later, and the old Democratic Party was a smoldering ruin, and, in the last triumph of old machine politics, Hubert Humphrey stood alone in the wreckage. Suddenly Nixon was in the lead, having masterfully maintained a smooth façade behind which he feverishly held his party's right and left wings in the fold, through a succession of ruthless maneuvers to see off George Romney, Nelson Rockefeller, Ronald Reagan, and the great outside threat to his new Southern Strategy, the arch-segregationist George Wallace. But then, amazingly, Humphrey began to close, and so, in late October, Nixon pulled off one of the greatest dirty tricks in American political history, an act that may well meet the statutory definition of treason. The tone was set for Watergate and all else that was to follow, all the way through to today."--Dust jacket flaps.… (more)

LibraryThing member Schmerguls
5547. Playing With Fire The 1968 Election and t all that one needed to know about the year. I attended 1968 Democratic Convention in Chicago having been elected an alternate supporting Bobby Kennedy. I found reading this book that there was much I did not know or had forgotten. The book can be faulted for inadequate source notes and those notes show that this is not an academic study but nevertheless is extremely aware and has the benefit of 50 years to assess the effects of the election of 1958 and those effects are vividly shown and many of the conclusions the author draws ring true. Certainly 1968 was the last year there were Republican liberals having any role in the Republican party.. The course of the year is told well, including the effect of the New Hampshire primary, the assassinations of Martin Luther King and Bobby Kennedy, the tumultuous Chicago Convention, and the dire events leading up to the narrow victory of Nixon. The truth of the following statement is made clear in the book: "Every day of the life that was left to him, Richard Nixon also had to fear the burden of the knowledge that his pardon did not protect him from anything he did before the presidency and that what he did to win the presidency was his greatest crime." He scuttled the conference which could have ended the war over 4 years before it ended, and thousands of lives needlessly taken because of Nixon's evil behavior..… (more)
6 more
LibraryThing member brianinbuffalo
A fact you must know before picking up this intriguing political work. "Playing With Fire" goes far beyond chronicling the fascinating 1968 political election. In fact, as many readers begin their journey in political waters flowing back to the late 1950s and early 60s, they might start wondering what gives. But they will soon realize that the context O'Donnell provides is critical. This comprehensive tome is not for fair-weather political observers. It requires a commitment from readers to plow through some sections that are excessively detailed and downright dry. But the effort is well worth it as O'Donnell sheds light on many of the most important political figures in the 20th century. True, the final pages become a bit preachy as the author makes a case with perhaps too much gusto that Eugene McCarthy should be given credit for helping to end the Vietnam War earlier than it may have ended without his political maneuvers. But in the end, "Playing With Fire" is an imporant and enlightening book.… (more)
LibraryThing member bemislibrary
This is a mixture of historical political events from the 1968 presidential election and Author O’Donnell’s personal recollections of events that occurred. He covers the key figures from the period, assassinations, violence at the Democratic convention in Chicago, and Vietnam War. Irregular subject organization and mixed tenses plays havoc with story pacing. It is an interesting account of the election, but the writing makes it hard to maintain interest at times. There are extensive notes, bibliography, and index.

I received this book through a Goodreads giveaway. Although encouraged, I was under no obligation to write a review. The opinions I have expressed are my own.… (more)
LibraryThing member ghr4
Lawrence O'Donnell's Playing with Fire: The 1968 Election and the Transformation of American Politics is an engaging account of the tumultuos 1968 presidential campaign and America's social and political divisions primarily precipitated by the escalating Vietnam War and the growing anti-war movement. O'Donnell strikes just the right balance, providing fascinating depth and detail about the candidates, the campaigns, and the backroom dealings while still retaining a smooth, propulsive narrative so that the book never becomes ponderous or unwieldy.… (more)
LibraryThing member nmele
I as not eager to read this book for some reason but I learned quite a bit about the 1968 campaign during which I was a low level but enthusiastic "Clean for Gene" kid. The negotiating among the candidates and between several of them and LBJ offered new windows into the government and, for me, the reasons I graduated from the anti-war movement into diplomacy, which seemed the only sane way to deal with the Cold War and its nuclear arsenals and Mutually Assured Destruction doctrine. I wasn't surprised to read about Nixon's treasonous and successful effort to derail peace talks but only because I had followed this story when it first broke a year or two ago. Finally, as someone who was active in the anti-war movement, I was pleasantly surprised that O'Donnell credits the anti-war movement with forcing our government to finally leave Vietnam. It's rare that a mainstream figure credits peace activists with their successes.… (more)
LibraryThing member sallylou61
Playing with Fire by Lawrence O'Donnell is an excellent, comprehensive view of the 1968 presidential election. Thru short chapters, Mr. O'Donnell described what was occurring in the different campaigns (or non-campaigns) from late 1967 through the election, going from one candidate or party to the other. All of the politicians including President Johnson, the candidates, and their campaign managers come through negatively in some aspects of the campaigns. Of course Mr. O'Donnell examined the violence which occurred during that year including the assassinations of Martin Luther King and Bobby Kennedy and the bloody riots during the Democratic National Convention in Chicago, which the National Commission on the Causes and Prevention of Violence later determined was a "police riot" (p. 420). Throughout the account, Mr. O'Donnell made evaluations, and pointed out what is still a problem. He showed that some features which Trump used in his 2016 campaign George Wallace had used in 1968. In the Epilogue, Mr. O'Donnell described what the major characters did later in life -- including who continued in politics, who went to jail, etc. At the end of the book, Mr. O'Donnell posed a number of "what if" questions, and suggested what might have happened under different conditions. The author concluded that Eugene McCarthy and the people for peace won since the war and draft ended by the mid 1970s.… (more)
LibraryThing member writemoves
I do not ordinarily read books authored by "talking heads" who host show on cable TV networks. However this was a well researched and well-written book about the 1968 presidential election. Given that I lived during this time, I was very intrigued by what I would learn and what I had forgotten from events that took place when I was 16 years old.

O'Donnell brought back many of my memories of the street violence during the Democratic National Convention. I also remember my total devastation when finding out that Bobby Kennedy had been assassinated in June 1968 after his victory in the California primary. I also remember my relief when Lyndon Johnson declined to run for another presidential term. 1968 was the time when I became extremely interested in politics. I remember how important it was from my personal standpoint and from the country's in our getting out of the Vietnam War.

This book is also a homage by O'Donnell to Eugene McCarthy. McCarthy decided to take on Lyndon Johnson and the Democratic Party in order to stop the Vietnam War. There is also a villain in the book. The villain is Richard Nixon who was willing to undermine Pres. Johnson's peace efforts so that he would be elected President.

The narrative of this book is extremely compelling. This may have been the most consequential year of my life and maybe in the history of the United States. Much of our poisonous politics can be traced back to 1968 due to Richard Nixon and George Wallace. I highly recommend this book for anyone interested in our history and our politics.… (more)
Fewer

The soul of America : the battle for our better angels by Jon Meacham
Presidents of War by Michael R. Beschloss
Blowout by Rachel Maddow
The Age of Eisenhower by William I. Hitchcock
Kennedy & Nixon : the rivalry that shaped postwar America by Christopher Matthews
2 more
The pioneers : the heroic story of the settlers who brought the American ideal west by David G. McCullough
American Ulysses: A Life of Ulysses S. Grant by Ronald C. White
Fewer