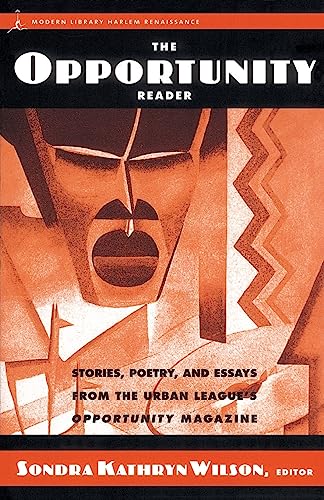 Modern Library Harlem Renaissance In 1923, the Urban League's Opportunity magazine made its first appearance. Spearheaded by the noted sociologist Charles S. Johnson, it became, along with the N.A.A.C.P.'s Crisis magazine, one of the vehicles that drove the art and literature of the Harlem Renaissance. As a way of attracting writers such as Langston Hughes and Zora Neale Hurston, Johnson conducted literary contests that were largely funded by Casper Holstein, the infamous Harlem numbers gangster, who contributed several essays in addition to money.         Dorothy West, Nella Larsen, and Arthur Schomburg were among Opportunity's contributors. Many of the pieces included in The Opportunity Reader have not been seen since their publication in the magazine, whose motto was "Not alms, but opportunity." The fertile artistic period now known as the Harlem Renaissance (1920-1930) gave birth to many of the world-renowned masters of black literature and is the model for today's renaissance of black writers.… (more)

Richard Wright : the life and times by Hazel Rowley
The making of Black revolutionaries by James Forman
Remember me to Harlem : the letters of Langston Hughes and Carl Van Vechten by Langston Hughes