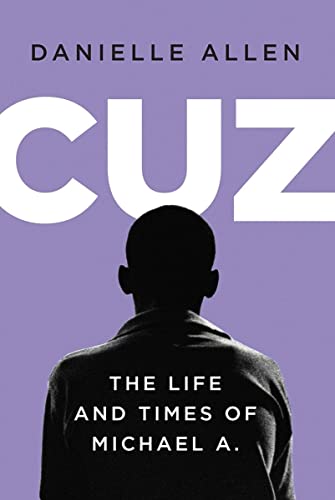 Cuz: The Life and Times of Michael A.

The author relates how her cousin was imprisoned at the age of fifteen for attempted carjacking and how she took him in upon his release, only to lose him to the deadly streets of South Central L.A. "A shattering work that shifts between a woman's private anguish over the loss of her beloved baby cousin and a scholar's fierce critique of the American prison system, Danielle Allen's Cuz seeks answers to what, for many years, felt unanswerable. Why? Why did her cousin, a precocious young man who dreamed of being a firefighter and a writer, end up dead? Why did he languish in prison? And why, at the age of fifteen, was he in an alley in South Central Los Angeles, holding a gun while trying to steal someone's car? Cuz means both 'cousin' and 'because.' In this searing memoir, Allen unfurls a 'new American story' about a world tragically transformed by the sudden availability of narcotics and the rise of street gangs--a collision, followed by a reactionary War on Drugs, that would devastate not only South Central L.A. but virtually every urban center in the nation. At thirteen, sensitive, talkative Michael Allen was suddenly tossed into this cauldron, a violent world where he would be tried at fifteen as an adult for an attempted carjacking, and where he would be sent, along with an entire generation, cascading into the spiral of the Los Angeles prison system. Throughout her cousin Michael's eleven years in prison, Danielle Allen--who became a dean at the University of Chicago at the age of thirty-two--remained psychically bonded to her self-appointed charge, visiting Michael in prison and corresponding with him regularly. When she finally welcomed her baby cousin home, she adopted the role of 'cousin on duty, ' devotedly supporting Michael's fresh start while juggling the demands of her own academic career. As Cuz heartbreakingly reveals, even Allen's devotion, as unwavering as it was, could not save Michael from the brutal realities encountered by newly released young men navigating the streets of South Central. The corrosive entanglements of gang warfare, combined with a star-crossed love for a gorgeous woman driving a gold Mercedes, would ultimately be Michael's undoing. In this Ellisonian story of a young African American man's coming-of-age in late twentieth-century America, and of the family who will always love Michael, we learn how we lost an entire generation."--Jacket.… (more)

LibraryThing member froxgirl
This is a stunning personal saga of a life gone wrong. The author's cousin Michael, despite trying mightily, is unable to wrest himself from domestic and street violence, despite loving help and care from the author and his family. One of the most remarkable chapters is Michael's written description of his brief time as an inmate firefighter, working on California wildfires, where he truly finds his purpose. In this dual work of biography and sociology, Ms. Allen provides what is, for this reader, a brand new description of gang and drug dealing life in LA, which she defines as the "parastate", where the public's demand for narcotic escape and the white power structure's fear of men of color merge to create the over-incarceration for non-violent crimes that persists and ruins communities to this day. She also explores the shameful conduct of prosecutors who only want easy, plea-bargaining cases to try, resulting in police efforts in solving difficult murders reduced.

Michael's mother, who tried to stabilize her family via marriage and transplantation across country for work, ends up getting caught up in the maelstrom. This is both a personal and political recounting, a must read for anyone who supports Black Lives Matter, and even more critical for those who are on the fence.

Quotes: "Here is one of the differences between my hell in prison and Dante's Inferno. The souls in the Inferno are called by name."

"Deterrence dehumanizes. It directs at the individual the full hate that society understandably bears towards an aggregate phenomenon."

"Once gangs turn predatory, they often prey on their own communities. Like taxing authorities, they come to see their communities as a source of extractable revenue."

"There were few rewards for virtue when it briefly flashed in his unforgiving world."… (more)
1 more
LibraryThing member sethwilpan
In “Cuz”, the story of the ill-fated life of the author’s cousin serves both as a eulogy and as a vehicle for a concise analysis of the conditions that led to his downfall. While the tale of economic deprivation leading to dysfunction and tragedy may sound familiar, the purpose of the book is not to break our hearts yet again, though it does. Instead, it offers a clear understanding of the forces at play and the policies at the heart of oppression as experienced real people. It’s the flesh and blood story that gives depth and indelibility to that understanding.

Gangs were originally formed for mutual protection against the attacks from racist outsiders. With the advent of the lucrative drug trade, some gangs used their organizational advantage to get in on the profits, though to a far lesser degree than was widely believed, even by law enforcement agencies who could have known better. The war on drugs conflated gang activity with drug dealing. Anti-gang measures essentially criminalized being black with roughly half the black men in Los Angeles in the gang database maintained by law enforcement.

At the same time the judicial system became clogged with low level drug use cases, rendering the system incapable of dealing with more serious crime. Homicide went unpunished enabling gangs to rule their turf with ruthless impunity. Youth are forced to join gangs on pain of death. Families do not have the resources to escape.

The author refers to the druglord tyranny as the parastate, which, along with the militarized police force brought to bear on neighborhoods victimizes the populations trapped within its borders.

Despite the weight of its subject, the book reads easily. The author’s tone is caring but unsentimental and her self-reflection made her approachable. Most valuable for me was her concise analysis of the forces at play, made tangible by the real lives they affected.
… (more)
Fewer