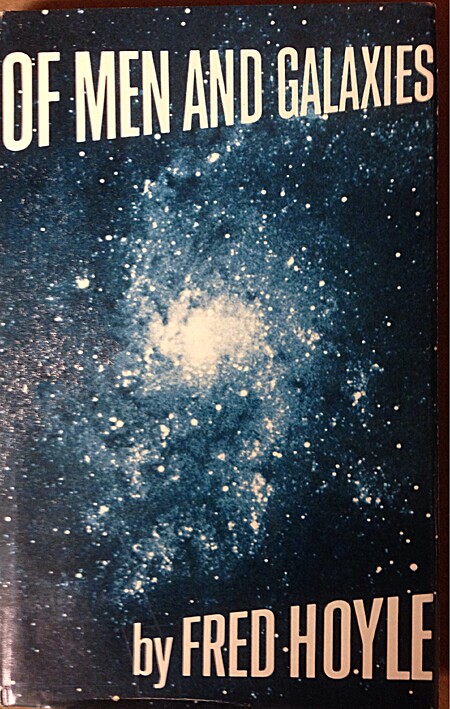 Of Men and Galaxies

British mathematician and astronomer Sir Fred Hoyle (1915 - 2001) coined the phrase "Big Bang" to describe the currently accepted explanation of the origin of the universe, and he did important work on the origins of stars and on the elements within stars. To the general public he was known more as a prolific writer of popular science books, in which he offered his stimulating ideas on the nature of our huge, fascinating cosmos. In this compilation of popular lectures delivered in 1964, he comments on the nature of the scientific enterprise, gives his view of life on Earth from the perspective of astronomy, and speculates about the future. Among the many interesting ideas discussed in this book is Hoyle's suggestion that "the emergence of intelligent life is not a meaningless accident" and he estimates that the existence of intelligent life on other planets is highly probable. Despite the enormous distances that separate the stars and planetary systems, he considers it very likely that humanity will eventually discover the technological means to communicate with intelligent extraterrestrial life. He also feels that the developmental pattern of life on Earth is probably not unique and that we "are following an inevitable path, one that must have been followed many, many times on other planets." In conclusion, he conjectures that contact with more advanced civilizations may prove vital to learning how to address the most daunting problems of life on Earth, such as avoiding nuclear war and managing the global stresses of the population explosion. These forward-looking lectures by one of the 20th century's great scientific minds make for exciting and rewarding reading.… (more)

LibraryThing member GlennBell
The book is a compilation of three lectures by Fred Hoyle. He is looking into the future from the time period of the 1960(?). He has some interesting insight into the limits of space travel but the possibility of interplanetary communication. He also looks into the future of the earth with emphasis on the problem of overpopulation and nuclear war. His thoughts on the logical evolutionary process of generation of beings with eyes, appendages, and land creatures assuming the largest brains (subsequent intelligence) makes sense. I recommend the book based on the intelligent insight that is presented to the reader.… (more)

Coming of age in the Milky Way by Timothy Ferris
Supersymmetry: Unveiling the Ultimate Laws of Nature by Gordon L. Kane
The grand design by S. W. Hawking