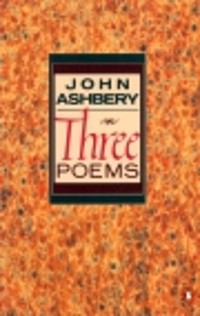 A provocative, challenging masterpiece by John Ashbery that set a new standard for the modern prose poem "The pathos and liveliness of ordinary human communication is poetry to me," John Ashbery has said of this controversial work, a collection of three long prose poems originally published in 1972, adding, "Three Poems tries to stay close to the way we talk and think without expecting what we say to be recorded or remembered."   The effect of these prose poems is at once deeply familiar and startlingly new, something like encountering a collage made of lines clipped from every page of a beloved book--or, as Ashbery has also said of this work, like flipping through television channels and hearing an unwritten, unscriptable story told through unexpected combinations of voices, settings, and scenes.   In Three Poems, Ashbery reframes prose poetry as an experience that invites the reader in through an infinite multitude of doorways, and reveals a common language made uncommonly real.  … (more)

LibraryThing member skholiast
A definitive work of late 20th-century American poetry, and John Ashbery's masterpiece. You may love what Ashbery does with language, washing it and wringing it out; you may find him too clever by three quarters; or you may think his work over-rated and his influence disastrous; but you can't
Show More
ignore him if you care about poetry in English. For myself, this book is up there with the Upanishads, the Tao te Ching, the Cloud of Unknowing, Spinoza's Ethics, "Fear & Trembling," the great poetic sequences of Rimbaud and of Rilke, the Tractatus Logico-Philosophicus, and "I & Thou." It is one of the great genre-transcending manuals of spiritual discipline. Charles Williams distinguished between two ways in the spiritual life: the Way of Affirmation, and the Way of Rejection, of Images. What Ashbery does here is walk the latter by way of the former, mixing the right-hand and left-hand paths. If you find it just baffling and weird, try reading it without the obligation to "get it." You can even go through it *fast* the first time, just letting the sound of words and the rhythm of the prose work on you. You may find that the meaning comes into focus about halfway through,like one of those 3-D pictures you have to stare at for a while. What Ashbery has done is to evoke the extreme nuance and imprecision of ordinary life, the way things happen *in practice* and not, ever, in theory, the way every instant is constantly shading off into the next moment and no experience stays put: you can be falling in love, or hearing terrible news one day; then, after some finite duration, you'll be learning to juggle or changing a diaper or realizing you never liked sushi. These things just happen, in all their bewildering thicket. And yet, an order emerges. Was it always there? Is "seeing it" just a function of our editing what has happened as we talk to ourselves? Or do we live in a broader story, only part of which we are overhearing? Ashbery makes these questions not a theoretical diversion but a lived mode of being, a prayer in the pulse. After this book "living inquiry" means something new. It isn't for everybody, but for some, "Three Poems" can become almost a breviary.
Show Less