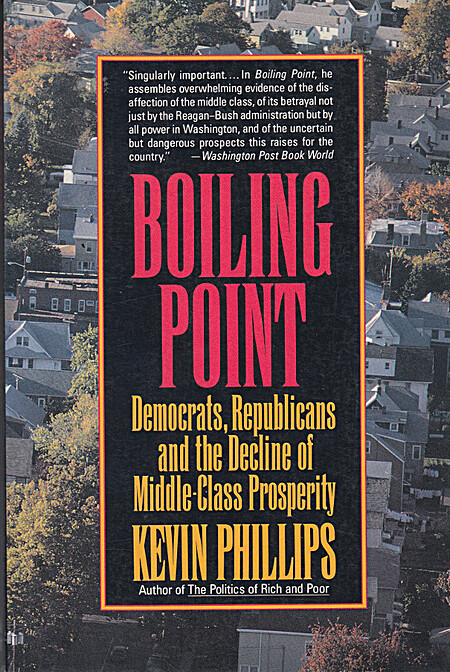 Boiling Point: Democrats, Republicans, and the Decline of Middle-Class Prosperity

"In the election of 1992, support for George Bush plunged to a level below Herbert Hoover's in 1932 as many middle-class suburbs voted Democratic and Ross Perot surged. In this book, Kevin Phillips shows how this populist explosion revealed a powerful new political force: widespread frustration over the decline of middle-class prosperity and the threat to the American dream." "Teenage homelessness in the Chicago suburbs ... crumpled home values in Southern California ... the worst job market for college graduates in New York City since the Great Depression: It all added up to the sharpest economic decline in decades, provoking political unrest unequaled in sixty years. There had been declines before, but no previous postwar downturn so damaged the white middle class as a whole or raised such fears that Americans might lose the unique economic privileges that they have enjoyed since World War II. Boiling Point shows in dismaying detail what has happened to the middle class since the 1970s in disposable income, earnings, home values, job prospects, public services, assets and net worth, pension safety and health insurance, and the next generation's prospects of enjoying the same rising living standards and upward mobility as its parents had. And it was not a natural result of adverse global trends but of deliberate political choices." "In the Reagan-Bush years American leaders who had once spoken up for the average family were celebrating investors, speculators, and the rich, shifting the burden of taxes from the wealthy to the middle class while starving public services and disregarding the growing debt that would punish future generations." "The populist anger so vivid in 1992 is not a onetime phenomenon. It will persist, Phillips says, until the middle class resumes the road to prosperity under government policies that it considers fair. It is on this that the politics of the 1990s now depends."--BOOK JACKET.Title Summary field provided by Blackwell North America, Inc. All Rights Reserved… (more)

Impostor : how George W. Bush bankrupted America and betrayed the Reagan legacy by Bruce R. Bartlett
The New Dealers: Power Politics in the Age of Roosevelt by Jordan Schwartz
Why Americans hate politics by E. J. Dionne
Collision 2012 : Obama vs. Romney and the future of elections in America by Daniel J. Balz
What's the Matter with Kansas?: How Conservatives Won the Heart of America by Thomas Frank
2 more
Behind the Oval Office : winning the presidency in the nineties by Dick Morris
American Theocracy: The Peril and Politics of Radical Religion, Oil, and Borrowed Money in the 21st Century by Kevin Phillips
Fewer