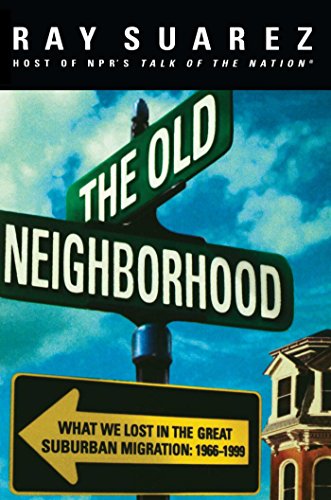 The Old Neighborhood: What We Lost in the Great Suburban Migration, 1966-1999

"Life in the city, for the millions who lived it, was once something less than the sum of their lifestyle choices: they woke up, they ate, they shoveled coal, loved, hated, prayed, mated, reproduced, died. For most, the home was not a display object but a place to keep the few things they had managed to hold on to from the surpluses produced by their labor. Their material life was made of the things they didn't have to eat, wear, or burn right this minute. A concertina maybe? A family Bible? A hunting rifle?" This life in "the old neighborhood," so lyrically captured by Ray Suarez, was once lived by a huge number of Americans. One in seven of us can directly connect our lineage through just one city, Brooklyn. In 1950, except for Los Angeles, the top ten American cities were all in the Northeast or Midwest, and all had populations over 800,000. Since then, especially since the mid-60s, a way of life has simply vanished. Ray Suarez, veteran interviewer and host of NPR's "Talk of the Nation®," is a child of Brooklyn who has long been fascinated with the stories behind the largest of our once-great cities. He has talked to longtime residents, recent arrivals, and recent departures; community organizers, priests, cops, and politicians; and scholars who have studied neighborhoods, demographic trends, and social networks. The result is a rich tapestry of voices and history. The Old Neighborhood captures a crucial chapter in the experience of postwar America. It is a book not just for first- and second-generation Americans, but for anyone who remembers the prewar cities or wonders how we could have gotten to where we are. It is a book about "old neighborhoods" that were once cherished, and are now lost.… (more)

City comforts : how to build an urban village by David Sucher
City life : urban expectations in a new world by Witold Rybczynski
Suburban Nation: The Rise of Sprawl and the Decline of the American Dream by Andres Duany
Home from Nowhere: Remaking Our Everyday World for the 21st Century by James Howard Kunstler
This land : the battle over sprawl and the future of America by Anthony Flint