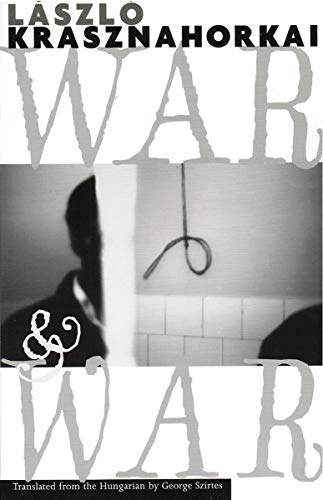 A novel of awesome beauty and power by the Hungarian master, Laszla Krasznahorkai. Winner of a 2005 PEN Translation Fund Award. War and War, Laszla Krasznahorkai's second novel in English from New Directions, begins at a point of danger: on a dark train platform Korim is on the verge of being attacked by thuggish teenagers and robbed; and from here, we are carried along by the insistent voice of this nervous clerk. Desperate, at times almost mad, but also keenly empathic, Korim has discovered in a small Hungarian town's archives an antique manuscript of startling beauty: it narrates the epic tale of brothers-in-arms strugglingto return home from a disastrous war. Korim is determined to do away with himself, but before he can commit suicide, he feels he must escape to New York with the precious manuscript and commit it to eternity by typing it all on the world-wide web. Following Korim with obsessive realism through the streets of New York (from his landing in a Bowery flophouse to his moving far uptown with a mad interpreter),War and War relates his encounters with a fascinating range of humanity, a world torn between viciousness and mysterious beauty. Following the eight chapters ofWar and War is a short "prequel acting as a sequel," "Isaiah," which brings us to a dark bar, years before in Hungary, where Korim rants against the world and threatens suicide. Written like nothing else (turning single sentences into chapters),War and War affirms W. G. Sebald's comment that Krasznahorkai's prose "far surpasses all the lesser concerns of contemporary writing."… (more)

LibraryThing member BayardUS
I usually don't like books with gimmicks: to me a book is good based on its writing, characters, plot, and what it has to say, and gimmicks usually don't add to those things- or at least don't add enough to justify themselves. War and War is a book with several gimmicks, and it's a testament to Krasznahorkai's skill as an author that the gimmicks have a point and add to the book. At the same time, they caused their own frustrations, and ultimately I didn't find this work as satisfying as The Melancholy of Resistance or Satantango.

The gimmick you'll notice first is that War and War is written in the form of extremely long sentences, some of which can go on for pages. I took this as a reflection of the main character's mental state, as he's none too stable, and more than a bit obsessed and confused. The run-on-sentences therefore mimics the breathless manic thoughts of the protagonist. This gimmick got old for me before even a third of the book was done, but because Krasznahorkai can continue each sentence indefinitely by just putting ", and" where a period would be, it doesn't detract much from the book (unlike, say, Perec's avoidance of the letter "e" in A Void, which forced him into writing a mess of a book). Even with these long run-on sentences the book is filled with striking images, though noticeably more in the early chapters of the book than later on.

The second gimmick is that the middle section of the book deals with a manuscript that the main character is typing up, but instead of ever reading any of this manuscript, Krasznahorkai gives us only the protagonist's descriptions of it, in the sentence style already discussed. This is the section where the book underwhelms, and unfortunately it's the section that needs to impress. The manuscript is supposed to be so impactful that it makes the main character abandon his entire life, sell all that he owns, and travel to the United States out of a belief that putting this manuscript on the internet will be a single action of value in an otherwise pointless life, and that after having fulfilled his purpose by transcribing the manuscript he will welcome death. Even if the character isn't mentally stable, the manuscript needs to be striking to make this believable. Instead, the main character's descriptions of the manuscript are mediocre. The four manuscript characters never feel distinct, the long sentence style of the book seems out of place when the manuscript is being described, and in general it was never as interesting as it needed to be. The middle segment where the manuscript is described is the weakest section of the book, and unfortunately it's also the longest.

The final gimmick reveals itself at the end of the book, when

Overall the early segments of War and War were the ones I liked the best, as they had some striking imagery and happened before the sentence gimmick started grating. Once the manuscript began getting described though, the book became far more of a slog. This is where the book should have really taken off and impressed. Unfortunately it did not, making this my least favorite Krasznahorkai book, below both Satantango and The Melancholy of Resistance. Still, being Krasznahorkai it was far more interesting than most books, and may be well worth your time, I just wish some aspects of the execution were better.… (more)
3 more
LibraryThing member BlackGlove
A tale of monomania?
War & War is a book within a book. For the most part it's the story of Korin the archivist, a somewhat unhinged free spirit, who unearths a manuscript of startling truth and beauty. Korin wants to publish his find on the internet (to make it "eternal"), and so he travels to New York, which for him is "the centre of the world".

Throughout the novel Korin reveals the contents of the manuscript as he talks endlessly to whoever will listen. The manuscript itself - the book within the novel - tells of the world-hopping exploits of four time-travellers and a mysterious other named Mastermann.

I enjoyed the writing style (i.e. the author's use of long sentences): it captures Korin's enlightened but overloaded mind. - What's it about? The search for lasting meaning, perhaps? A futile attempt to secure immortality? The melancholy that results from realising that man (no matter how much he wants it) cannot go beyond conflict?...

All in all I'd define it as a pessimistic novel about the final days of a homeless soul whose chance discovery and obsession with a unique manuscript dooms him. Difficult and frustrating at times, though enjoyable because of the protagonist's spirited innocence.… (more)
LibraryThing member stillatim
War & War was less gripping, I thought, than Melancholy of Resistance, though that might just be about me: this one leaned a little too far towards self-obsessed-writer territory, which certainly can't be said about any of the other Krasznahorkai I've read. Here, a clerk reads a manuscript and decides it's so good that it must be put on the internet for all to read. We get the story of his going to New York, which he considers the center of the world, and also indirect description of the manuscript. I can't help thinking that the book was originally just the manuscript itself, and that Krasznahorkai ultimately decided that it needed a frame. He was probably right, though it is also enjoyable enough in its own right, with a typical Krasznahorkaian demonic type, and three more or less innocents, who keep bumping into each other at historically important moments: the end of the (I think) Minoan civilization; the discovery of the New World; Hadrianic Rome; and so on. He needed the frame to give these chapters a more definite shape.

As ever, the language is the main point, but the formal constraint (one sentence per section) really does work against the book. Whereas the long sentences in his earlier work are unintrusive, here you're constantly reminded that Krasznahorkai is a writer of long sentences. And the long sentences are too often too obviously just quite long sentence joined together with commas and conjunctions.

But the ideas are a little clearer here, in large part because the innocents in the MS are philosophically minded:

And thanks to the frame-narrative structure, Krasznahorkai gets to have people comment on the MS with an obvious sense that they are also commenting on his own work:

"... the answer was right there in front of him all the time and he should have seen it, did in fact see it, and, furthermore, admired it, but had failed to understand it, failed to understand what he was looking at and admiring, meaning that the manuscript was interested in one thing only, and that was reality examined to the point of madness, and the experience of all those intense mad details, the engraving by sheer manic repetition of the matter into the imagination..."

"... once a sentence begin it doesn't want to stop, not because--let's put it this way--because it is about to fall off the edge of the world, not in other words as a result of incompetence, but because it is driven by some crazy form of rigor, as if its antithesis--the short sentence--led straight to hell..."

I do appreciate the characters-interpreting-texts bits, too. Nothing wrong with being explicit about what you're trying to do.

This edition also contains a short story, 'Isaiah has Come,' a kind of prequel to the novel. This is fine, but nowhere near as interesting as the novel itself, and, for some incomprehensible reason, has been typeset in a sans serif font that would make users of comic sans wince with embarrassment.… (more)
LibraryThing member bluepiano
There aren't many works of fiction I've read--not since childhood, anyway--that left me feeling that the characters, settings,and events were real. This one did, which is probably why I can't get its details out of my head nor altogether shrug off the sadness it aroused. You'd think that the device of using sometimes very long sentences (which are so beautifully constructed that even if you stop reading in the middle of one, you'll very easily find your place again) with innumerable clauses would distance the reader from what is related, but that's not at all the case here. I'm not sure how Krasznahorkai imparts so strong a sense of realness to his writing; he certainly doesn't take the obvious options like using description or dialogue to do so. Part of the effect might be due to the personalities of the main characters being displayed bit by bit and layer by layer: Korin, for example, is at first shown only as garrulous and obssessive, then quite pitiable and, gradually, becomes a learned and rather canny man who is in the end sympathetic rather than pathetic. And, in the end, the only thing that saved the book from being heart-breaking was the introduction of a few characters who also find Korin sympathetic enough to listen to.

There's a sort of epilogue, a closing section, to the book that I've a qualm or two about. Whilst its setting and happenings are wonderfully atmospheric, the tone and the content feel markedly different to what's gone before. The discrepancy doesn't exactly jar, but for me it momentarily blunted the impact of what preceded it. If I could somehow read War and War for the first time again knowing what I do now, I'd read the closing section before reading the rest of the book. And I most emphatically wouldn't have looked up the website mentioned until I'd reached the appropriate page.

(That's pretty much the review I posted on amazon. After I did a reader commented that in fact that seeming epilogue was written and published before the novel; it was a sort of 'pre-novel sketch'. So it indeed might be better read before the rest of the book.)… (more)
Fewer