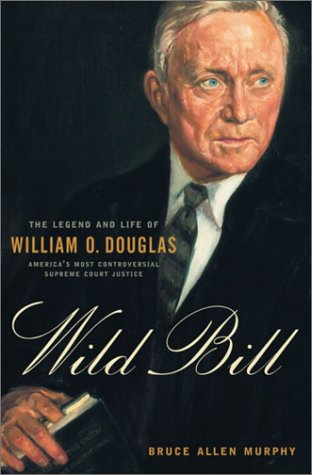 Wild Bill: The Legend and Life of William O. Douglas

William Orville Douglas was both the most accomplished and the most controversial justice ever to serve on the United States Supreme Court. He emerged from isolated Yakima, Washington, to be dubbed, by the age of thirty, "the most outstanding law professor in the nation"; at age thirty-eight, he was the chairman of the Securities and Exchange Commission, cleaning up a corrupt Wall Street during the Great Depression; by the age of forty, he was the second youngest Supreme Court justice in American history, going on to serve longer--and to write more opinions and dissents--than any other justice. In evolving from a pro-government advocate in the 1940s to an icon of liberalism in the 1960s, Douglas became a champion for the rights of privacy, free speech, and the environment. While doing so, "Wild Bill" lived up to his nickname by racking up more marriages, more divorces, and more impeachment attempts aimed against him than any other member of the Court. Using what he called "literary license" he wrote three memoirs in which the American public was led to believe that he had suffered from polio as an infant and was raised by an impoverished, widowed mother whose life savings were stolen by the family attorney. He further chronicled his time as a poverty-stricken student sleeping in a tent while attending Whitman College, serving as a private in the army during World War I, and "riding the rods" like a hobo to attend Columbia Law School. Relying on fifteen years of exhaustive research Bruce Allen Murphy reveals the truth behind Douglas's carefully constructed image.… (more)

What kind of nation : Thomas Jefferson, John Marshall, and the epic struggle to create a United States by James F. Simon