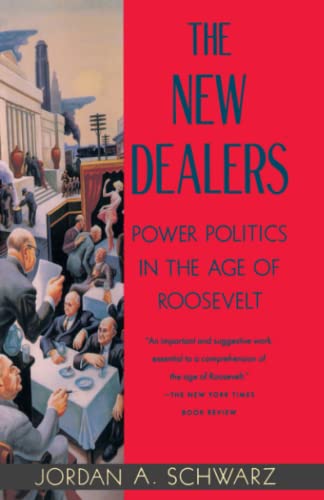 The New Dealers: Power Politics in the Age of Roosevelt

The New Dealers is the story of the men who transformed modern America. In this bold and controversial book about the New Deal, Jordan Schwarz brings forth a new thesis - that during the 1930s men of money and politics sought not merely to save capitalism but, in the name of individualism and community, to expand the system to enrich their regions - and themselves - in the greatest redistribution of economic and political power in U.S. history. As such, the New Deal. With its great success in building alliances between government and business, became an extraordinarily powerful engine of state capitalism. The New Dealers is replete with colorful characters: Jesse Jones, a Texas banker whose mastery of Washington surpassed anything in the annals of twentieth-century politics; Bernard Baruch, whose search for power and influence almost always occurred behind the scenes; David Lilienthal, whose direction of the Tennessee Valley. Authority completely altered the country's utility system; Tommy Corcoran, the Washington lawyer and deal-maker par excellence; Sam Rayburn, Lyndon Johnson and Wright Patman, three Texans who spoke for the impoverished South and West; Henry J. Kaiser, the prototype of a New Deal industrialist. And through their stories, Schwarz sheds new light on the mind and operations of the man at the pinnacle of the New Deal: Franklin D. Roosevelt. Finally, Schwarz shows how the New. Deal idea had its roots in the presidency of Woodrow Wilson, and how it extended through the 1950s and '60s to expansion around the globe, to Vietnam, and beyond the gravitational pull of the earth.… (more)

Speak now against the day : the generation before the civil rights movement in the South by John Egerton
Man of the People: A Life of Harry S. Truman by Alonzo L. Hamby
Traitor to His Class : The Privileged Life and Radical Presidency of Franklin Delano Roosevelt by H. W. Brands