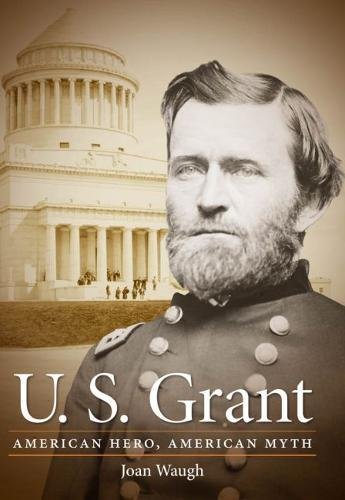 The University of North Carolina Press, (2009)

At the time of his death, Ulysses S. Grant was the most famous person in America, considered by most citizens to be equal in stature to George Washington and Abraham Lincoln. Yet today his monuments are rarely visited, his military reputation is overshadowed by that of Robert E. Lee, and his presidency is permanently mired at the bottom of historical rankings. In an insightful blend of biography and cultural history, Joan Waugh traces Grant's shifting national and international reputation, illuminating the role of memory in our understanding of American history. Using a wide range of written and visual sources--newspaper articles, private and public reminiscences, photographs, paintings, cartoons, poetry, and much more--Waugh reveals how Grant became the embodiment of the American nation in the decades after the Civil War. She does not paper over Grant's image as a scandal-ridden contributor to the worst excesses of the Gilded Age. Instead, she captures a sense of what led nineteenth-century Americans to overlook Grant's obvious faults and hold him up as a critically important symbol of national reconciliation and unity. Waugh further shows that Grant's reputation and place in public memory closely parallel the rise and fall of the northern version of the Civil War story--in which the United States was the clear, morally superior victor and Grant was the symbol of that victory. By the 1880s, Waugh shows, after the failure of Reconstruction, the dominant Union myths about the war gave way to a southern version that emphasized a more sentimental remembrance of the honor and courage of both sides and ennobled the "Lost Cause." During this social transformation, Grant's public image changed as well. By the 1920s, his reputation had plummeted. Most Americans today are unaware of how revered Grant was in his lifetime. Joan Waugh uncovers the reasons behind the rise and fall of his renown, underscoring as well the fluctuating memory of the Civil War itself.… (more)

The New Republic
Grant’s full vindication—which will render him one of the greatest presidents of his era, if not of all American history—still awaits. But when it comes, we will better understand our complicated history, and historians and citizens will have Joan Waugh to thank for helping to make this belated illumination possible.

LibraryThing member cyderry
I'm not going into a full review of this book basically because the three parts - his life, his reputation, and his effect on history was IMO, though well-written, lacking in enough details to make a full review worthwhile.

What this book did document was the successful way that Grant directed the entire Union forces after taking charge in 1864. It seems that so many believe that Grant was an unfeeling man because of the vast numbers of soldiers that were killed in the battles nearing the end of the war, but his own words show how he felt the necessity of being victorious. "we all felt, even those who did not object to slavery, that it was a stain on the Union that men should be bought and sold like cattle...We were fighting an enemy with whom we could not make peace. We had to destroy him. No convention, no treaty was possible--- only destruction."

This book did show the difficulties that Grant went through to complete his memoirs. He had been diagnosed with threat cancer and his last years were filled with tremendous pain and discomfort. Completing the books which told his viewpoint of the war became, after his death, a massive bestseller which provided financially for his wife, Julia, and his family.

This book did not give sufficient details of the presidency of Ulysses Grant, however, it did justify the stature in which he was held in the hearts of his countrymen.… (more)
1 more
LibraryThing member mybucketlistofbooks
Very good overview of Grant's life and career as well as a very good review of how Grant's reputation has changed over the years Professor Waugh does a really good job showing how unbelievably popular Grant was in his time.

After his death southern historians did a very good job planting doubts about Grant's accomplishments into mainstream thought. Recently however Grant's reputation has been on the upswing - and deservedly so. This book is a continuation of that trend… (more)
Fewer

Lincoln president-elect : Abraham Lincoln and the great secession winter 1860-1861 by Harold Holzer
Personal memoirs by Caleb Carr
Appomattox: Victory, Defeat, and Freedom at the End of the Civil War by Elizabeth R. Varon
The Man Who Saved the Union: Ulysses Grant in War and Peace by H. W. Brands