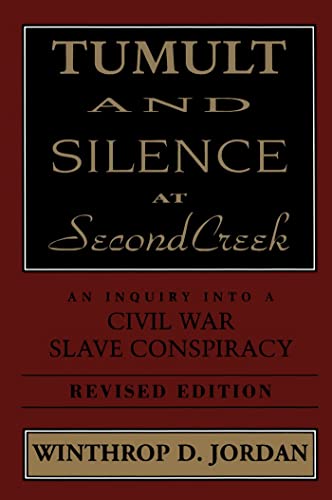 Tumult and Silence at Second Creek: An Inquiry Into a Civil War Slave Conspiracy

"In the war-fevered spring and summer of 1861, a group of slaves in Adams County, Mississippi, conspired to gain their freedom by overthrowing and murdering their white masters. The conspiracy was discovered, the plotters were arrested and tried, and at least forty slaves in and around Natchez were hanged. By November the affair was over, and the planters of the district united to conceal the event behind a veil of silence." "In 1971, Winthrop D. Jordan came upon the central document, previously unanalyzed by modern scholars, upon which this extraordinary book is based - a record of the testimony of some of the accused slaves as they were interrogated by a committee of planters determined to ferret out what was going on. This discovery led him on a twenty-year search for additional information about the aborted rebellion." "Because no official report or even newspaper account of the plot existed, the search for evidence became a feat of historical detection. Jordan gathered information from every possible source - the private letters and diaries of members of the families involved in suppressing the conspiracy and of people who recorded the rumors that swept the Natchez area in the unsettled months following the beginning of the war; letters from Confederate soldiers concerned about the events back home; the journal of a Union officer who heard of the plot; records of the postwar Southern Claims Commission; census documents; plantation papers; even gravestones." "What has emerged from this odyssey of research is a brilliantly written re-creation of one of the last slave conspiracies in the United States. It is also a revealing portrait of the Natchez region at the very beginning of the Civil War, when Adams County was one of the wealthiest communities in the nation and a few powerful families interconnected by marriage and business controlled not only a large black population but the poorer whites as well." "In piecing together the fragments of extant information about the conspiracy, Jordan has produced a vivid picture of the plantation slave community in southwestern Mississippi in 1861 - its composition and distribution; the degree of mobility permitted slaves; the ways information was passed around slave quarters and from plantation to plantation; the possibilities for communication with town slaves, free blacks, and white abolitionists. Jordan also explores the treatment of blacks by their owners, the kinds of resentments the slaves harbored, the sacrifices they were willing to make to protect or avenge abused family members, and the various ways in which they viewed freedom." "Tumult and Silence at Second Creek is a major work by one of the most distinguished scholars of slavery and race relations. Winthrop D. Jordan's study of the slave society of the Natchez area at the onset of the Civil War is a landmark contribution to the field. More than that, his exhaustive and resourceful search for documentation and his careful analysis of sources make the study an extended and innovative essay on the nature of historical evidence and inference."--BOOK JACKET.Title Summary field provided by Blackwell North America, Inc. All Rights Reserved… (more)

Arguing about slavery : the great battle in the United States Congress by William Lee Miller
The Black Family in Slavery and Freedom, 1750-1925 by Herbert George Gutman
Free Soil, Free Labor, Free Men : The Ideology of the Republican Party Before the Civil War by Eric Foner
Slaves No More: Three Essays on Emancipation and the Civil War by Ira Berlin