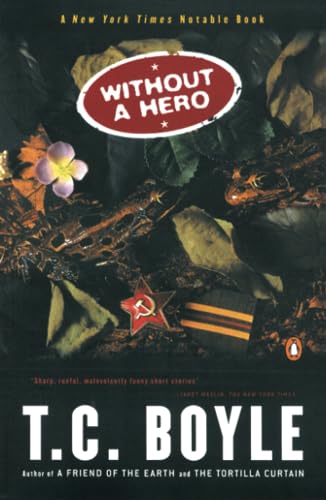 Without a Hero: Stories

"A critic recently said of T. Coraghessan Boyle, "More happens in one of Boyle's stories than in most post-Victorian novels." This is precisely the case in Without a Hero, fifteen stunning stories that each, in its own way, displays a virtuosity and versatility rare in literary America. In this, his fourth story collection, Boyle takes chance after chance, even to the point of reexamining the ethos of Ernest Hemingway, one of the masters of the form. In "Big Game," the wild animal safari takes place not in Africa but on a pay-per-shoot ranch in Southern California and includes an elephant hunt and its vivid consequences. There are echoes here of Hemingway's classic "The Short Happy Life of Francis Macomber" and Green Hills of Africa, but Boyle's hunting story is drawn for the age of ecology rather than an age without limits." "Throughout, Boyle displays an astonishing range as he zooms in on such American specimens as the college football player who knows only defeat; the entrepreneur who creates a center for acquisitive disorders; the couple in search of the last toads on earth; and the boy caught between the ingenuousness of childhood and the cynicism of adulthood in "The Fog Man." In some of these stories, Boyle makes you laugh out loud; in others you come closer to understanding the human condition because of the way he cuts to the secret places in his people's hearts. Here is the author of the highly praised 1993 novel, The Road to Wellville, entering a richer and deeper phase in his writing life, his stories bursting with what the Los Angeles Times has called his "ferocious, delicious imagination, often darkly satirical and always infatuated with language.""--BOOK JACKET.Title Summary field provided by Blackwell North America, Inc. All Rights Reserved… (more)

LibraryThing member Jamnjazzz
As with all his short story collection, Boyle creates many compelling worlds, characters and situations. And the beauty of short stories is that, although some may not pan out over the long haul, they are perfect for their own little niche of 15-20 pages.
1 more
LibraryThing member booklove2
As usual, T.C. Boyle is phenomenal. No one else could write a story about football and make me care this much. This story is perfect! The stunners in this collection: 56-0, The Fog Man, Sitting on Top of the World, Big Game, Back in the Eocene, Carnal Knowledge. Second tier of greatness that I can't not mention: Filthy with Things, Top of the Food Chain, Without A Hero, Little America. But as usual, I enjoy each story. And as usual, my least favorite stories are the ones that just don't contain enough detail for me. Over the last two years, I've read the entirety of the massive first collection of short story collections and I still want MORE. I think the first four of his short story collections descend in greatness, but only by a slim margin with 'Descent of Man' definitely being the favorite collection. Mr. Boyle, always the genius. I'm so glad he writes so much. If I could only read one writer's books, Boyle would be it.… (more)
Fewer