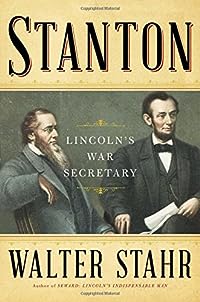 "Walter Stahr, author of the ... bestseller Seward, now tells the amazing story of Lincoln's secretary of war, Edwin Stanton, the most powerful and controversial of the men close to the president. Stanton raised an army of a million men and directed it from his Washington telegraph office, with Lincoln often at his side. He arrested and imprisoned thousands for "war crimes," some serious and some merely political. He was essential to the nation's survival, and Lincoln never wavered in his support for Stanton. As Lincoln lay dying, Stanton took over the government, informing the nation of the attacks on Lincoln and others, starting the investigation of the assassination, Under Lincoln's successor, Andrew Johnson, Stanton insisted that the army had to remain in the South, to protect blacks and Unionists, while the president wanted to withdraw the troops. It was Johnson's ill-advised attempt to remove Stanton that led to the first impeachment of a president, an impeachment Johnson survived by a single vote. The New York diarist George Templeton Strong described Stanton after his death as 'honest, patriotic, able, indefatigable, warm-hearted, unselfish, incorruptible, arbitrary, capricious, tyrannical, vindictive, hateful, and cruel." But Stanton was also Lincoln's "right-hand man," responsible with Lincoln and Grant for saving the Union. In this, the first full biography of Stanton in fifty years, Stahr restores this complicated American hero to his proper place in our national story."--Jacket.… (more)

Grant by Ron Chernow
Team of Rivals: The Political Genius of Abraham Lincoln by Doris Kearns Goodwin
1864: Lincoln at the Gates of History by Charles Bracelen Flood
American Ulysses: A Life of Ulysses S. Grant by Ronald C. White
The Reconstruction presidents by Brooks D. Simpson
5 more
Lincoln and Douglas: The Debates That Defined America by Allen C. Guelzo
Lincoln at Cooper Union: The Speech That Made Abraham Lincoln President by Harold Holzer
Lincoln's Emancipation Proclamation : The End of Slavery in America by Allen C. Guelzo
The Tragic Era: The Revolution after Lincoln by Claude Gernade Bowers
What Lincoln Believed: The Values and Convictions of America's Greatest President by Michael Lind
Fewer